My first #timelapsetuesday from Camp 1 of Peak Lenin, a preview of what's to come next this week on jonjay.org #sunset

Click on the center of the image to see the timelapse

I spent a lot of time at the end of 2013 and the beginning of 2014 trying to get people to come to Central Asia to climb Peak Lenin, a 7134 meter peak on the border of Kyrgyzstan and Tajikistan. One person I expressed interest to was Björn, my Swedish friend in Almaty who had attempted it two years prior. We met at my favorite bar in Almaty, Stalker, in November, 2013, to talk about the climb so I could sell it to some friends in America in December. Luckily for me, this meeting planted a seed in Björn, and with a little coincidental encouragement from his super-awesome wife to “get back into the mountains,” he would end up being my only partner for the trip, as everyone else I invited could not make the journey.

Author’s Note: For an overview of this trip, please Click Here.

I finished my Pamir Highway Trip on June 10th, and met Björn the morning of June 12th in Osh. We had originally planned for Chris to join as well when we booked the trip, but because he could not make it due to work, I figured we had an entire car booked for the two of us.

While in Osh I met a lady named June who was doing some volun-tourism in Sary Moghul, which was on the way to the base camp of Peak Lenin. I offered her a ride knowing we would have a free seat in the car. Our driver also picked up a Catalonian mountain biker at the Osh Airport who was planning to do the Pamir Highway on bike, so the four of us set off from Osh in the morning. We walked through the protests at Sopu Korgon, dropped off the biker at Sary Tash, left June in Sary Moghul, and Björn and I traveled onwards to Achik-Tash, the then-deserted base-camp village.

The driver left Björn and I as the sun set with the question “Did you bring food?” We assured him we did, and as he drove off, Björn realized he dropped us off about a mile from where he could have actually driven. We hiked across the stream and set up camp for the night at the Onion Field trailhead. The next day, we had absolutely fabulous weather for the hike to Camp 1, and only a few instances where we could not find the trail because of snow. Camp 1 is at about 4400 meters above sea level, which was the highest I had ever hiked to before (this is the elevation of Mt. Elbert in Colorado). Needless to say, I was stoked to camp here and continue higher.

The biggest issue at Camp 1 was the crevasses at the toe of the glacier. The majority of them were covered in snow, and our late-afternoon arrival meant that the snowbridges were soft and could easily break under the weight of a human. We evaluated our options, and ultimately ended up camping closer to the moraine than the glacier out of the interest of safety, and would move camp in the morning when the snowbridges were frozen. I set up the timelapse at the beginning of this post as we watched the spectacular sunset, which would be our last visible sunset until we returned to Osh.

The next morning we broke down camp and crossed to the part of Camp 1 closest to the climb. After stashing our things we set out for an acclimatization hike, which put us about halfway to Camp 2. We returned to Camp 1 through the first of many intermittent snow storms, only to find some of our food we had stashed had been picked at by birds, but not enough to raise any alarms. We counted out the proper number of food packets for the days we would be above Camp 1, left a cache of the rest and equipment we would not need, and set off early the next morning to make it to Camp 2.

Despite both of us slathering down in sunscreen for the glacier climb, I soon figured out why people have glacier goggles, as my eyes were sunburned from the acclimatization hike. I made some impromptu glacier goggles out of duct tape which I would sport for the rest of the trip until we were off the glacier. I was pretty proud of my resourcefulness, but I will definitely invest in proper glacier goggles next time.

Just before Camp 2, had to cross over the top of the prominent ice fall looker’s right on the face of the mountain into the “Frying Pan.” We roped up for this section, which had a mellow slope to climb that totally took the wind out of my sails. Björn noted that when he had last tried the climb, there were many the other climbing parties here, playing cards and laughing as he and his team slogged up the slope to Camp 2, 5300 meters above sea level. We struggled, but all we heard was to eery silence as the clouds and snow rolled in and out around us.

We would end up spending the next three nights at Camp 2, as the weather report said the first day would be bad, which it was, but we woke up to thigh-deep snow on the second, which made conditions for the climb to Camp 3 less than ideal. After the third night, we would go higher.

Back at the protest at Sopu Korgon. Photo: Bjorn 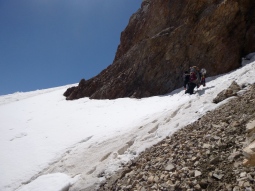 The second snowfield crossing of the day. Photo: Bjorn 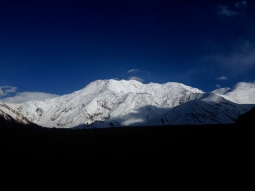 View from Achik-Tash Base Camp, which was deserted

Beautiful rock formations on the hike to Camp 1 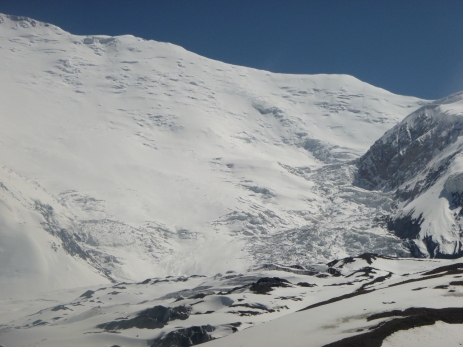 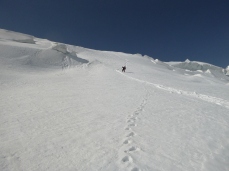 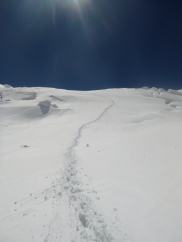 There was a lot of sitting action every day as we waited for clouds to roll out so we could see where we were going on the glacier. Photo: Bjorn

Bjorn Setting off for Camp 2 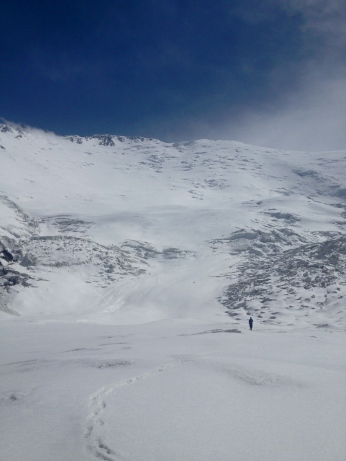 A whole lot of climbing in front of me. Photo: Bjorn