We awoke to a small amount of snow on the tent on the second day at Camp 2, but not nearly as much compared to the 30 centimeters that fell the night before. Anxious to do more than sit around and play cards in the snow, Björn and I broke camp to climb the first section to Camp 3.

Author’s Notes: This trip is a continuation from this post: Did You Bring Food?

For an overview of the attempt of Peak Lenin, Click Here.

There are plenty of extra photos in the gallery at the end of the post.

There was a long traverse between the first climb and the second climb, and this is where clouds moved in on us. Visibility was less than ten meters, and the ridge we were on was probably about twenty meters wide with large cornices on both sides. We sat in the clouds for a few hours, which was the daily norm at this point. Eventually the cloud did clear, and the big climb presented itself.

Up to this point, the snow had been ankle- to thigh-deep since Camp 1, so I was dreading this climb, anticipating deep snow on a constant slope for 400 meters. But, at the base of the climb, the snow was suddenly firm and frozen. I could hardly contain my excitement, and ascended up the climb much too quickly, abandoning the slow pace with which we arrived.

At the top of the climb at 6100 meters above sea level, the wind picked up as I assembled my shovel to dig out a tent platform. I did my best to help Björn when he arrived setting up the tent, but I had exhausted myself on the climb. At about 6pm, I decided to lie down for a bit to rest before melting water for the next day’s summit attempt, but by 7pm, I heard Björn also lie down in the tent, and we both fell asleep. We did not eat dinner, melt water, or do much to prepare for the next day, which we would regret.

I woke up around 3am the next day, hoping to at least melt some snow for the day’s water. The winds from the evening before had not stopped, and despite my many attempts, I could not get the stove to light outside of the tent. I eventually got too cold in my attempts and had to retreat into the tent, where I was able to melt snow over a pretty long period of time. We did not leave Camp 3 until about 7am, which was super late.

There is a small descent from Camp 3 to a saddle-shaped ridge, and I decided to stroll on the windswept snow, not too far ahead of Björn. We did this section of the climb unroped, as there was no indication of any crevasses for the rest of the climb.

Right at the base of the saddle, the ground disappeared below my feet, and I fell into a crevasse.

I fell about three meters onto a snowbridge, which I luckily landed on perfectly to not break through. I quickly kicked my crampons into the sides of the crevasse, and firmly planted my ice ax as well. I yelled “I’m OK!” as loudly as I could, but it was a long heartbeat before I heard Björn shout my name. After tossing my pack out to indicate where I was, he anchored his ax and pulled me out. The whole event was over in less than 30 seconds, and when I was safely out, Björn said “Let’s just stick to climbing on the stones.” They were the wisest words spoken on the trip, as later that day he took one step off the stones and fell thigh-deep into another crevasse.

We climbed up the stones on a partially visible path up to Camp 4, and then worked our way up to a rock with a few memorial plaques at about 6474 meters above sea level. Björn was moving a bit slow, and I was suddenly drained of energy when he caught up to me. It was noon, and a storm was on the horizon as well. We called it good here, and began the longest walk of my life back to Camp 3 in the strongest blowing snow I have ever been in.

We awoke the day after the summit attempt with almost a half meter of snow on the tent. This was disconcerting in two ways: we had to dig out the tent, and we had to descend the big climb in the new snow, which was definitely avalanche terrain. I had Björn give me a hip belay for the first two sections of the slope, and when it was established it was stable, we worked our way down. As if the weather sensed our presence at the bottom of the slope, the clouds moved in again on the ridge we had spent hours on before, forcing to to wait and then move slowly back to Camp 2.

We waited at Camp 2 for a break in the weather, and then all of a sudden it was blue skies and hot. We got down the gentle slope that had beaten us down on the initial climb to Camp 2, and then the weather fouled up again. Stuck in a cloud above a massive glacial slope with many covered crevasses, we slogged back up the hill to Camp 2 for the night with our will to carry on nearly defeated.

I think it was this point we decided pizza and orange juice in Osh was what we needed, and the thought of this delicious food drove us on.

Once again, we woke up with blue skies, and we made our way down to Camp 1, roped up and working hard to avoid crevasses covered by all the snow that had fallen when we were higher on the mountain. We only had one scare and a few route finding issues, but we were back to Camp 1 an hour before the weather deteriorated again.

We found our food cache at Camp 1 completely destroyed. Despite burying everything under rocks, birds had dug out and opened nearly everything, including odd items such as the clothing repair glue. Nearly all the food we hid under rocks was gone, save for the Mountain House Chili con Carne, which had still been opened but not eaten, and was then destroyed by the snowfall. So, even though our lack of energy from not eating food at Camp 3 might have hurt our summit attempt, it was now all the food we had, which was lucky. It started snowing again, so we called it a night, anticipating hiking back to Achik-Tash the next day. 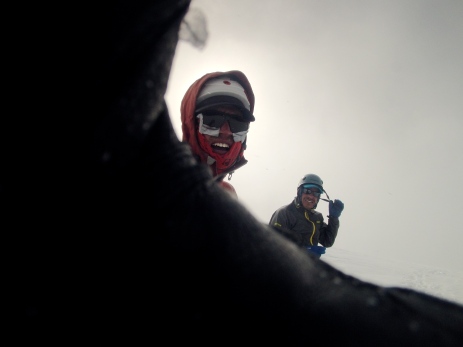 GoPro in the Fog

Goofing off with the GoPro in the Fog

High hopes and blue skies almost literally out of the tent at Camp 2. Photo: Björn 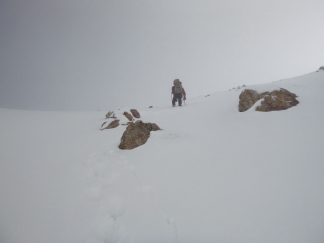 But the blue skies were gone soon after we reached the top of the first climb. Photo: Bjorn 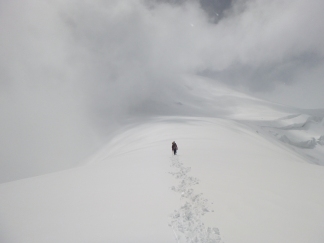 Approaching the base of the climb to camp 3. Photo: Björn 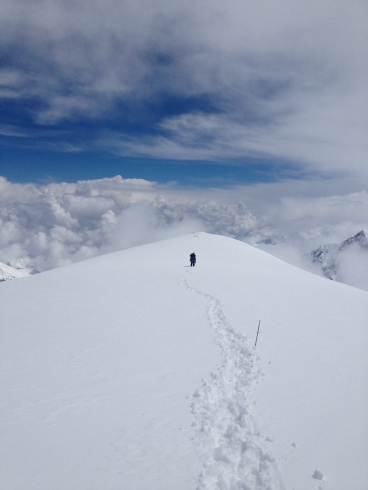 Bjorn above the clouds on the way to Camp 3

The big climb to Camp 3, taken on the return to Camp 2

View of the Summit from Camp 3 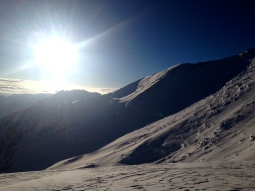 Not far from Camp 4, and not much further to where we turned around. Photo: Bjorn 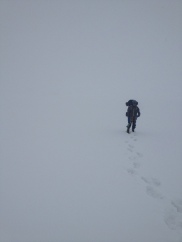 Bjorn in the clouds, again

Clouds moving in on the Frying Pan

The hike out from Camp 2

Looking back towards Camp 2 and Camp 3

View on the descent to Camp 1 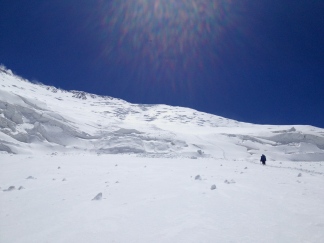 Hiking out of the main climb to Camp 1

Route finding in avalanche debris on the way to Camp 1