We awoke in Langar on June 6th, 2014, ready to head to Ishkashim, but anticipating at least one stop during the day at a hot springs along the way. Our intrepid driver Sailaubai (pronounced Sauleboy) had a different schedule, however, that was much more interesting and educating than Svend, Helen, or myself anticipated.

Author’s Note: This post is a part of many associated with my trip on the Pamir Highway in June, 2014. For a complete overview of this trip, please click this link.

Our first stop was also unanticipated by Sailaubai, however, as Svend requested a quick photo stop not too far from Langar. When the Pajero stopped, an unmistakable hissing noise indicated a slow but growing leak in one of the tires. I helped Sailaubai with the fix-a-flat he had brought while Svend and Helen meandered around one of the farms of Zong. The skilled Sailaubai swiftly fixed it, and we were back on the road quickly.

Sailaubai had explained to me a bit about Pamiri culture in Russian when we were in Langar, and it was reiterated and seen throughout the trip to Ishkashim. Pamiri people are Shiite Muslims, unlike the rest of Central Asia which follows Sunni Islam. They also have strong influences from Zoroastrian roots, which is a form of Shamanism. We ended up staying in, and visiting a few, traditional Parmiri homes, which have symbolic architecture that was originally intended to represent Zoroastrianism, but was adapted for Ismaili Shiite Islam. We also stopped at one Oston, or Shrine, which was covered in awesome Marco Polo Sheep skulls with the horns still intact.

The drive was also very different from the alpine terrain we had covered the day before. Instead, we drove through lush, green farms and farming villages. The mountains still rose up on our right, further into Tajikistan, and to our left, across the Pyanj River, into Afghanistan. Sailaubai stopped the car in a town called Vrang, and pointed to a hillside where he said there was a stupa, or Buddhist Shrine. I could not see it, but I was excited to stretch my legs. Svend and Helen were taking photos along the road, so I headed out on my own to what looked like a normal hillside.

The first thing I noticed, walking through a farm, was a massive but friendly looking dog bounding through a field to say hello. He led me up the trail to the base of the cliffs below the stupa, and wanted to take me to the right. I had spotted a slot canyon I wanted to explore, however, so I bid adieu to the dog and found three young boys hollering at another tourist couple who had their own guide. The kids gave up, and came to talk to me in surprisingly good English. They wanted to sell me what looked like polished rocks, but I politely refused and headed into the canyon. They screamed at me to not go in and emphasized the danger of rockfall by throwing rocks, which, when I ignored their warnings, turned into a competition to see who could make the biggest splash and yell the loudest. Annoyed, I walked out of the canyon, and pointed out Svend and Helen, who were on their way up the same trail (sorry about this Svend and Helen, but they were pretty annoying). Sensing potential customers for their rocks, the boys abandoned me and I snuck up the hill to the stupa while they solicited Tajik currency, called somoni, from my travel companions.

Svend actually ended up buying some of their rocks, but the boys still had the audacity to chase me down the cliffs demanding somoni from me as well, despite not actually helping me in anyway beyond preventing me from exploring the slot canyon. Ignoring their pleas, I made my way back to Sailaubai at the SUV, and before long, we made another stop in Yamg to check out the Pamiri house museum.

The museum was very interesting, but the curator’s decided to speak to me in Russian and I translated into English for Svend and Helen, so, given my poor Russian skills, much of the finer points of the history and culture of the Pamiri people he spoke of were lost to us. We carried on, and soon ascended a hill to the Bibi Fatima hot springs, but not before exploring the Yamchun Fort.

Sailaubai would explain to me that this fort was built by Macedonians from Alexander the Great’s conquest of the region, but I cannot independently verify this. He also said those who controlled the fort could keep an easy lookout on the various traders moving through the valley to Langar or Wakhan, and take what they needed by attacking caravans. This was much more believable, as exploring the ruins led to some great views of the valley below.

After a wonderful soak in the Bibi Fatima Hot Springs, which is highly recommended if you are in the area, we carried on as the clouds moved in. The closer we got to Ishkashim, the more militarized and civilized the villages we passed became. This followed common sense, as much of the heroine and opium from Afghanistan comes through this way for a variety of reasons, including the fact that Ishkashim is where there is a formal border crossing between the two countries. We made one more stop at the 3rd-Century BC Khaakha Fortress, which Sailaubai said to me through a laughing smile, knowing I know what kaka means in Russian. This place was really cool, and ultimately really old, which allowed my imagination to run wild about how amazing this place would have been 2000 years ago, and perhaps how similar it remains.

Tired from the long day of go, stop, explore, and repeat, we arrived in Ishkashim just before the rain started. We stayed at the Hanis Guesthouse, where the dorm-style rooms and cockroaches were the antithesis of the guesthouses we stayed in for the three nights prior. I was happy to meet other travelers over dinner, however, including Changiz and Will, an Iranian and a Dutchman who I would travel with only a few days later. 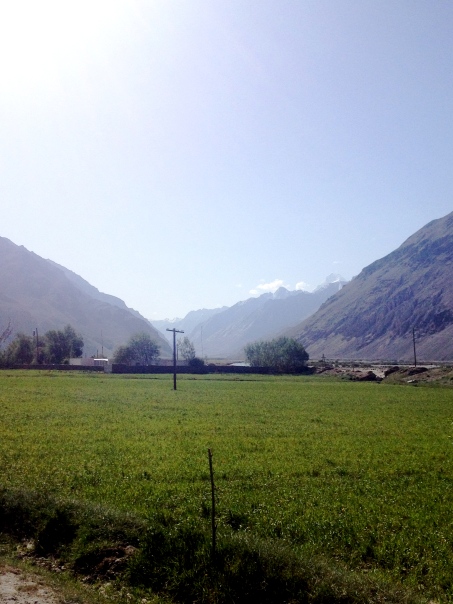 Leaving Langar in the morning light

The farms of Zong. Not so different than Langar, probably because when you leave one town you are in the other.

An Ismaili Oston, or shrine, just outside of Zong

One of the many mountains and farms along the Pyanj River 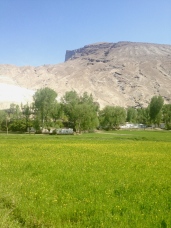 Flowers on a farm walking to a Buddhist Stupa 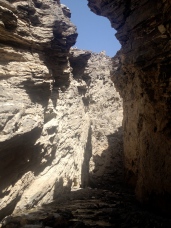 Slot Canyon just beyond the Stupa 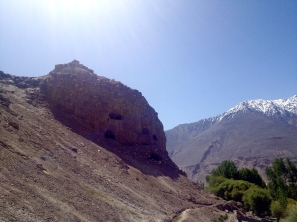 Panorama of the stupa. For an interactive version of this photo, click on it. 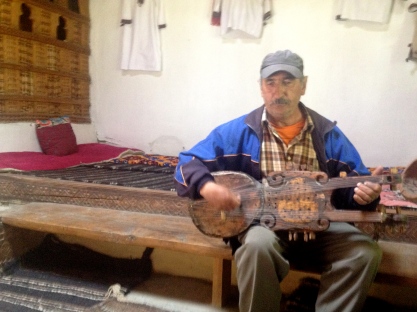 The curator of the Pamiri house museum playing on his Pamiri instrument, which is significantly more elaborate looking than the Kazakh dombra 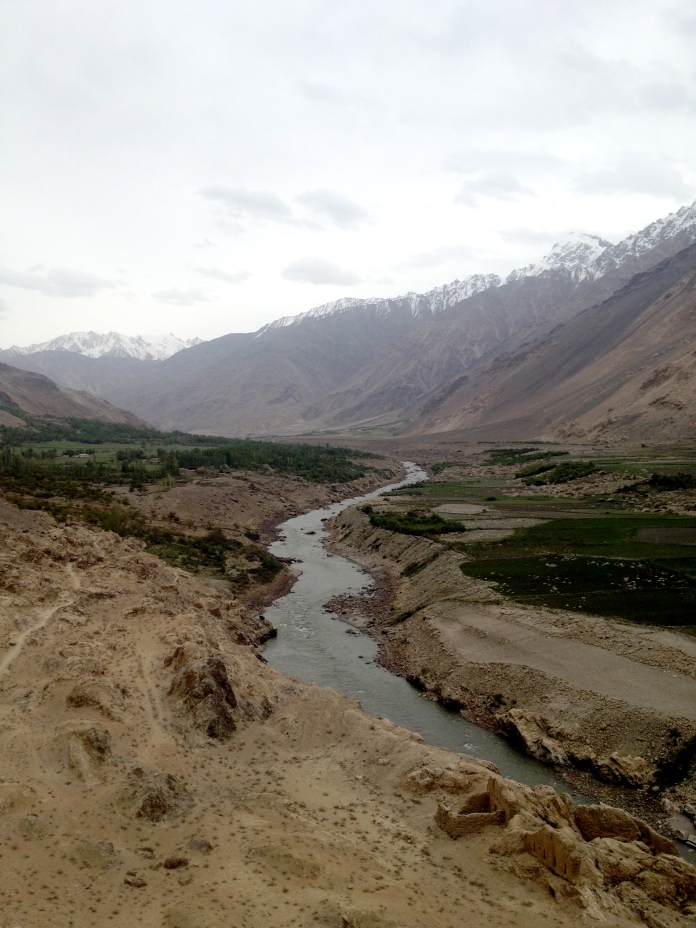 The mighty Pyanj River from the Kaakha Fortress

One thought on “Langar to Ishkashim: History & Culture on the Pyanj River”