Davinia had a great idea to spend Valentine’s day together in Istanbul. We had both never been there, and she scored a super cheap ticket from Birmingham, so it seemed like a great excuse to play hooky from work and see a rather well-known city over a long weekend. I was also the last Princeton in Asia Fellow, from this year or the year before, to visit Turkey.

I arrived about 5 hours before Dav, so I went into town to find our hostel, which took me significantly longer than expected because of a wrong turn. After dropping off my bag, I decided to try and find Vefa Bozacisi, a cafe that serves boza, a fermented wheat drink I read about a few weeks before. One thing I was especially excited to see in Istanbul were the parts of the city that inspired Orhan Pamuk, one of my favorite authors, and the New York Times had just published an article about his favorite hangouts. Being familiar with Davinia’s tastes, I was pretty sure she would not want to trek out to a suburban area to drink something made from fermented wheat, so I took the time to find it before she got there. My search was in vain, however, as I did not find the cafe, but I did find the beautiful Sehzadebasi Mosque.

After picking up Dav from the airport, we spent the first few days mostly exploring Sultanamet, the main tourist district of Istanbul. One of our first stops was the highly recommended Cisterne, which was an underground resevoir that supplied fresh water to the city’s inhabitants and was fed by Roman Aquaducts. Now it’s a pretty sweet place for tourists, and a place to see how good your camera’s low light settings are.

The one place Davinia and I really wanted to see was the Hagia Sophia. It was originally built as a Cathedral in 537 AD, and about 1000 years later converted into a mosque. Now it is a museum, and easily one of the oldest buildings I have ever been in. It is the type of place you can feel when you’re inside of it, it is a place where so many people have been looking for spiritual guidance that you can’t help but wonder about the millions of stories held within the walls. 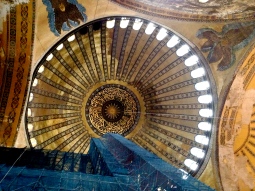 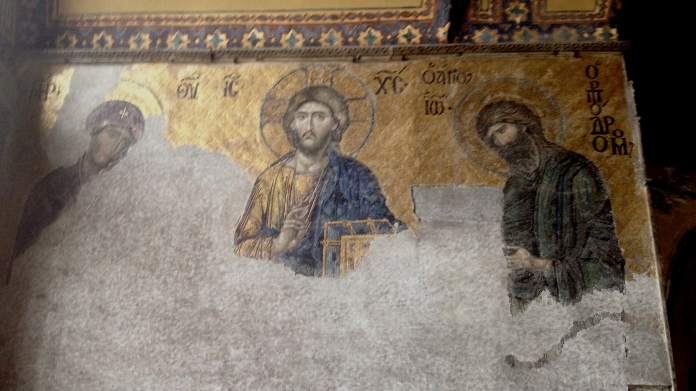 The other main stop for us at Sultanamet was the Blue Mosque, a massive construction still used as a mosque, but also a primary tourist destination. We attempted several times to get in, but it always seemed to coincide with call to prayer, so we weren’t let in until our third try.

Beyond Sultanamet, we spent most of the evening exploring the Galata part of town. Our first trip there included a ride up the Galata Tower, one of the more visible buildings in the city’s enormous skyline. It was especially pleasant at night, as the city’s many lights juxtaposed with the darkness of the sea.

Outside of Gelata, we walked Istiklal Avenue and many of the side streets at night, hunting for art galleries and trendy dinner options. This area was full of people out enjoying walks between the intermittent rain that plague our entire weekend there. I was also surprised not very many people are hurt by the trolley that rolls down the street every five minutes, sometimes as a stage for a band.

One thing Istanbul is also known for are the numerous bazaars that dot the map of the city. We certainly spent a good amount of time in the main bazaar and the spice bazaar, but perhaps my favorite place in the entire city was the book bazaar. The combination of the university students trying to find academic books combined with antique vendors pedaling miniaturist paintings sums up a lot of the culture I have experienced during my time in Kazakhstan (working at a University) and while traveling in Uzbekistan, where I was both reading a book about miniaturist artists (written by Orhan Pamuk) and was able to talk with several artists about their work. I haggled for a miniaturist polo scene before leaving, but I have a feeling that when I return to Istanbul with a bit larger budget I will spend more time and money in the book bazaar.

We did spend one day in Üsküdar after taking the ferry from Sultanamet to “the Asia side.” There was a festival going on, but we avoided the lines for fish sandwiches and instead hiked up the hill to a cafe with a beautiful view of the sea and the European side. We then meandered back to the coast to enjoy the sunset framed by the Maiden’s Tower.

Almost every day, we would walk by some boats full of men flipping fish on a grill, and selling “Fish Bread” for the equivalent of $2 USD. Davinia and I were both on a budget, so we helped ourselves to Fish Bread and Turkish Bagels quite often. I am also especially partial to Halva, which is a dessert the sweet shops in Istanbul are happy to provide, and were a great reason to duck out of the rain squalls for a Turkish coffee. It was a fantastic trip with a fantastic lady, and a place I know I will return to again in the future.

One thought on “Fish Bread”