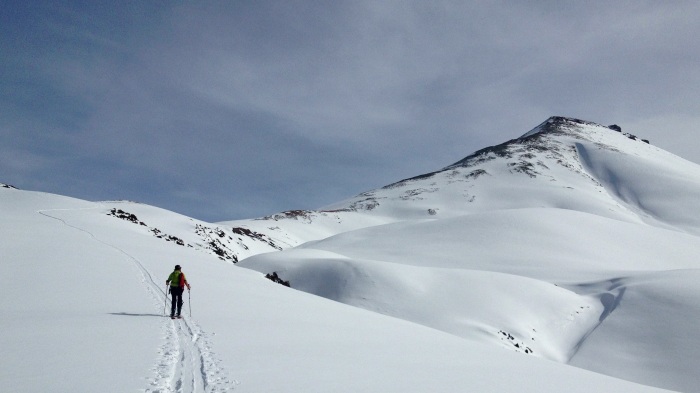 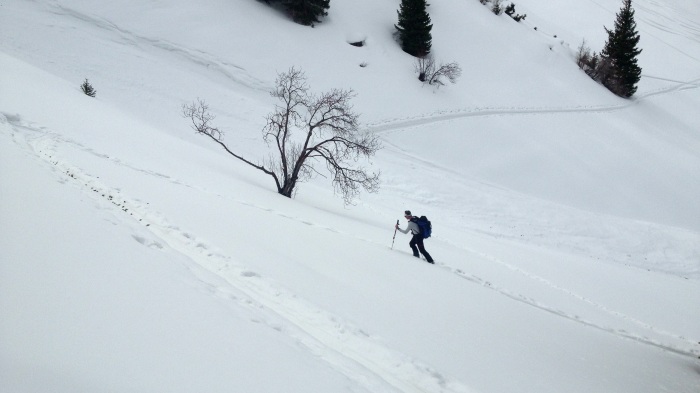 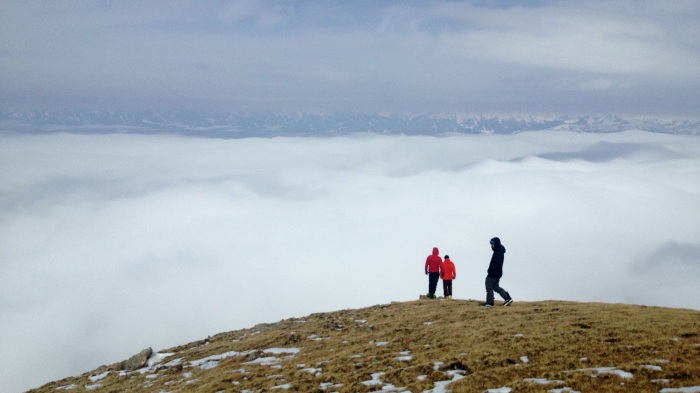 During the first week of March, I took a roadtrip from my home in Almaty to Karakol, Kyrgyzstan for a week of skiing with 40 Tribes Backcountry with my ski buddies Bill and Konrad, plus Bill’s buddy Ian visiting Central Asia from Maine. I posted the GoPro footage from the trip here, which is a good glimpse of some of the skiing we did. The huge terrain doesn’t work well for photos when your main camera is an iPhone 4s, but I made due with some awesome touring and scenic photos.

In addition to our crew, there was also Tom, a splitboarder from England who joined us for the full week, and Sebastian, a German splitboarder who joined for three days in the middle of the week. Our host was Ryan Koupal, a splitboarder from Boulder, and living legend Ptor Spricenieks was our guide. As awesome as it was to ski with him, I know he probably would not approve of this blog.

Like Kazakhstan and Colorado, Kyrgyzstan has a continental snowpack, which means it can be avalanche prone in December through April. We got there right as the winds had deposited enough snow to make some slopes dangerous for skier triggers, and we saw enough avalanches to keep the “extreme” skiing to a minimum. At the same time, intense warming below made for late-day wet slides. Needless to say, it was a complex snowpack to be on, and I was glad to have Ryan and Ptor around to make judgements and ski cuts.

To get to Jalpak Tash, it’s a 40 minute drive from Karakol to Ichke Jergez, where we spent a night with a wonderful local family. From there, we surfed the back of a flat-bed truck up an already melted-out mud road for 30 minutes, then we toured for an hour to the yurt, known as Jalpak Tash. The location is pretty much unbeatable, all things considered, from the views of the mountains above to the lake below.

One thing I might be remembered for was that I was the first person to build a jump “over” the outhouse. It wasn’t a direct “over,” which is why I put quotations around it, but it was a pretty fun litte gap jump with a tricky banked run in.

Beyond the jump, the skiing we did was fantastic, including two first descents by the group. The first, which we skied after Double Eagle slid, was called “Grandmother’s House” by Ryan since we had to go over the river and through the woods to get there. The other was “F*ck Coffee,” which we skied after “Up for Coffee” slid, and is pictured above.

This program was one of the reasons I moved to Almaty, and to be able to spend a week at Jalpak Tash was a dream come true. Thanks again to the crew for making it an awesome time, and I hope to do it again in the future if Ryan lets me come back. Make sure to check on the gallery below for more photos, and if you like them, you might also like Ian’s photos. 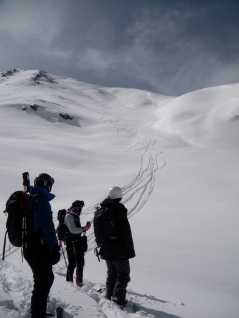 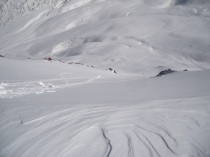 “Up for Coffee” looks good? 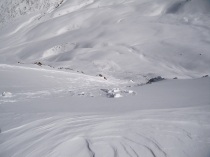 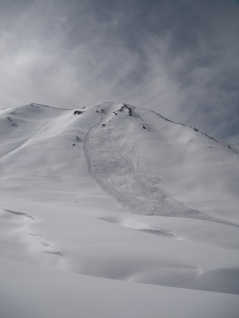 Glad we kicked that 3rd cornice off 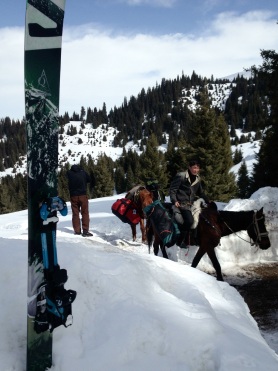 Konrad coming in above Double Eagle

Konrad coming out of “Grandmother’s House” 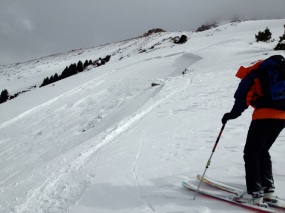 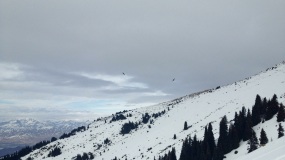 Two eagles examined the slide path later, which was a site to see. 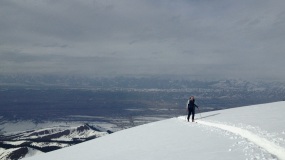 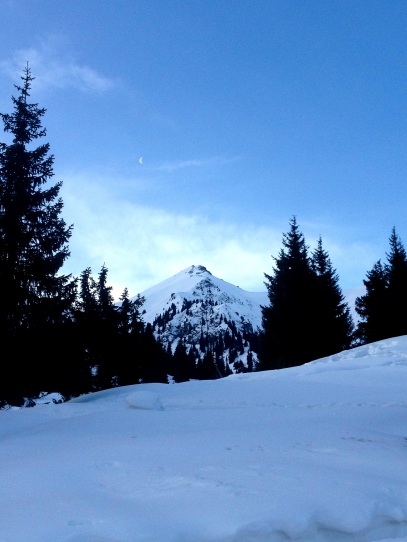 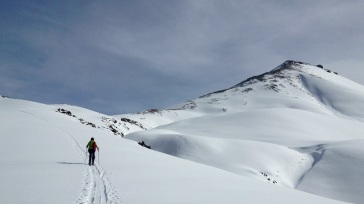 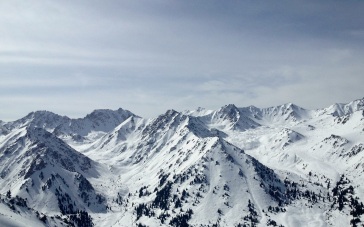 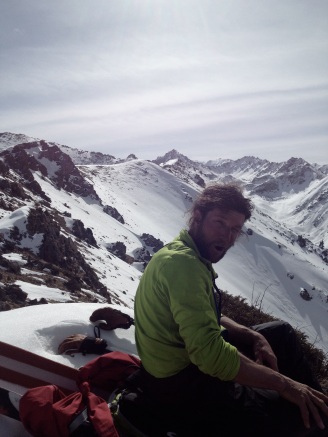 Ptor was impressed by the aforementioned view 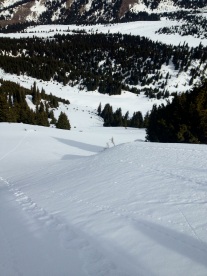 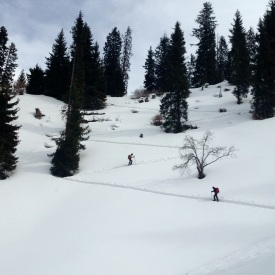 Touring out of the Wolf Ridge Zone 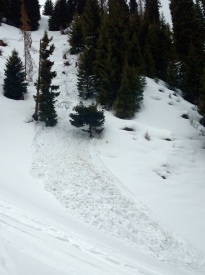 Wet slides while down-skinning are not much fun. 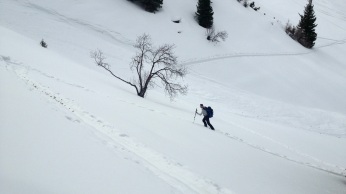 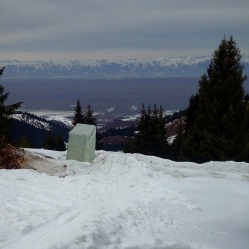 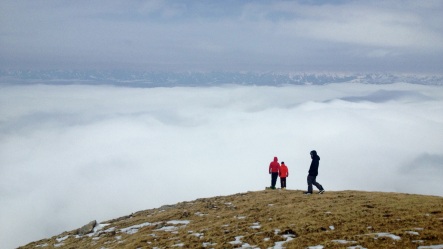 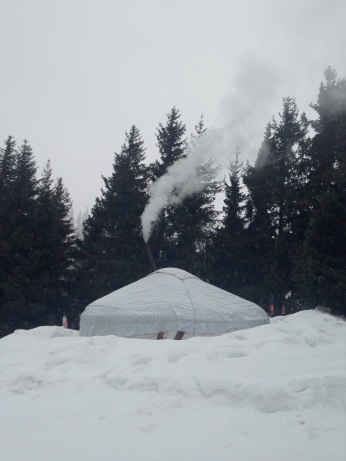 The Yurt at Jalpak Tash 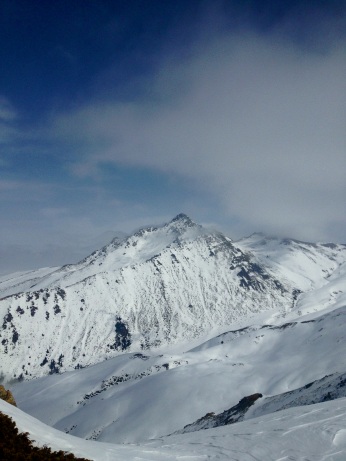 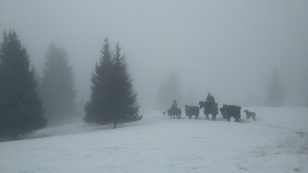 When it was all over, it was time to follow the horses into the fog and back into civilization

Looking up at Yurtsee, the last run on the last day

One thought on “Beyond Jalpak Tash”