The stars aligned a few weekends ago. Months before, Trine and I had planned to meet in Moab for a fun weekend together, right around the time I knew I could afford a new bicycle. Three weeks before the aforementioned weekend, she told me a crew of friends from SLC would be coming down with her. One week later, I got an invite from my great friend Jon, who was rallying a crew from Denver to go to Moab on the same weekend. And, finally, the week before the planned trip, I got an email from the DU Alpine Club that they were planning their first trip to Moab after a year and a half hiatus from the Eastern Utah Desert, and would be accompanied by some Alum I knew well in college. As I said, the stars aligned a few weekends ago.

After arriving in the dark and checking in with the crew on Friday night, Saturday morning brought lots of excitement once everyone realized who was who and whatnot. One crew rallied to climb Ancient Art, the route Trine and I climbed back in Februrary. The SLC crew was off to the Bar M trails followed by some climbing at Wall Street. Others were off to hike in some desert canyon. Trine had to go teach a WFR class all afternoon, but I was able to recruit the Sexauer siblings to accompany me on my first ride on my new bike.

Slickrock trail is undoubtedly my favorite trail in the world, and I knew it would be a great place to ride my new bike. After a couple months of studying Russian, I have named the bike Белый (Russian for “White,” as in “White Bicycle,” or “Белый велосипед.” Pronounced bee-ah-lee). I have ridden белый for a few weeks now, and I absolutely love this bike. Many thanks to the kind folks at Sunlight Ski & Bike in Glenwood Springs for helping me find her.

While Slickrock is my favorite trail, Jon and Amanda are undoubtedly two of my favorite people in the world, and it was definitely treat to ride with only the two of them instead of the entire Alpine Club, as I have done in years past. I don’t see these two as much since I moved from Denver, so we had an absolute blast together with our bikes on rock. I hope to ride with them both a lot more this summer before heading to the other side of the world.

We also found some random bolts for climbing, and were instantly curious about the climbs that they protected. There were also a few decorations in the rocks. 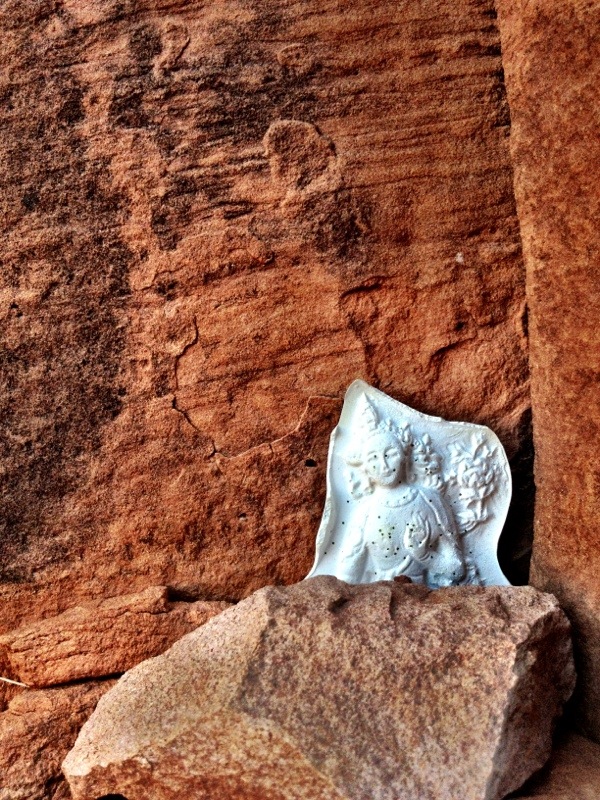 We arrived at the bottom of the hike just as it became too dark to see, and returned to the campsite to check in with the groups.

The next day, I drove Trine an Amanda to Moab International Airport for some skydiving. Because of the new bike, I could not afford the fee to jump out of the plane attached to someone with a parachute, but the girls had the time of their lives.


A hearty breakfast followed the jump, and then a return to camp, a quick climb at Wall Street for myself, and a return to town to meet up with the SLC crew so Trine could head back.

Because all the parties involved were driving 5+ hours to Denver or Salt Lake, I had a profound realization that I had less that 3 hours of driving in front of me, and got an extra 4 hour ride in on the Bar M trail system. It was a great start to a summer on Белый.