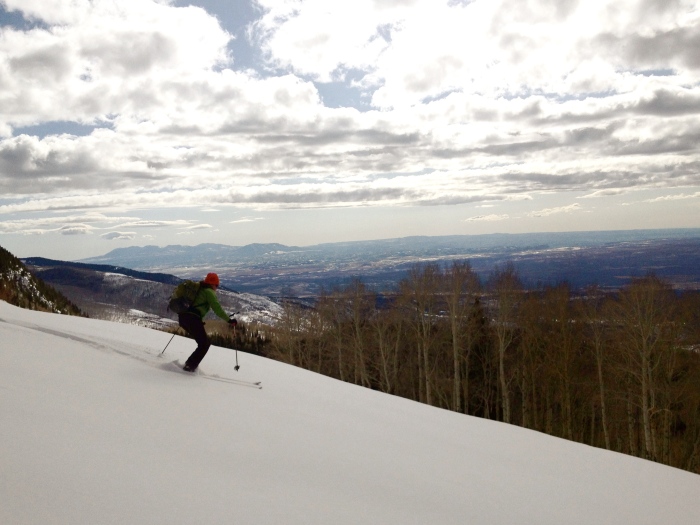 A couple of weeks ago, I took a long weekend for an interview in Los Angeles and some fun in Utah afterwards (I had the best intentions of spending a nice afternoon in Los Angeles, but you’ll have to ask me in person sometime about the aforementioned afternoon and how it turned into a rather stressful 3 hours in the City of Angels). After a quick interview and dinner at a Thai restaurant in LA, I flew to Salt Lake City for a roadtrip with Trine back to Colorado by way of Moab. I hadn’t been to Moab in a few years, and I had never been there in February, so it was going to be a unique experience already. The fact that we spent one day skiing and did a multi-pitch trad climb on the next, however, created two totally unique days for me in the area.

With the crazy snowpack this year, my days in the backcountry have been limited. I was stoked on the possibility of exploring some new terrain though, so we set out to ski above the desert Saturday morning.

Trine had a dated guidebook for the area which mentioned the snowpack was more similar to Colorado’s than Utah’s, so we picked out a tour to some low-angle tree runs known as “Corkscrew Glades.” We found a creek crossing along the way, which turned into an improv photo shoot.

When we reached the zone we were looking for, we were alrealy pretty worried about the various whoomphfs and shooting cracks we had created on no-angle terrain, so we decided to ascend the mellowest slopes possible. The noises and cracking followed us up, but no real movement occured. The ski down allowed for some amazing shots of Trine having fun on skis high above the Utah desert, and left us craving for a return during a better snow year. 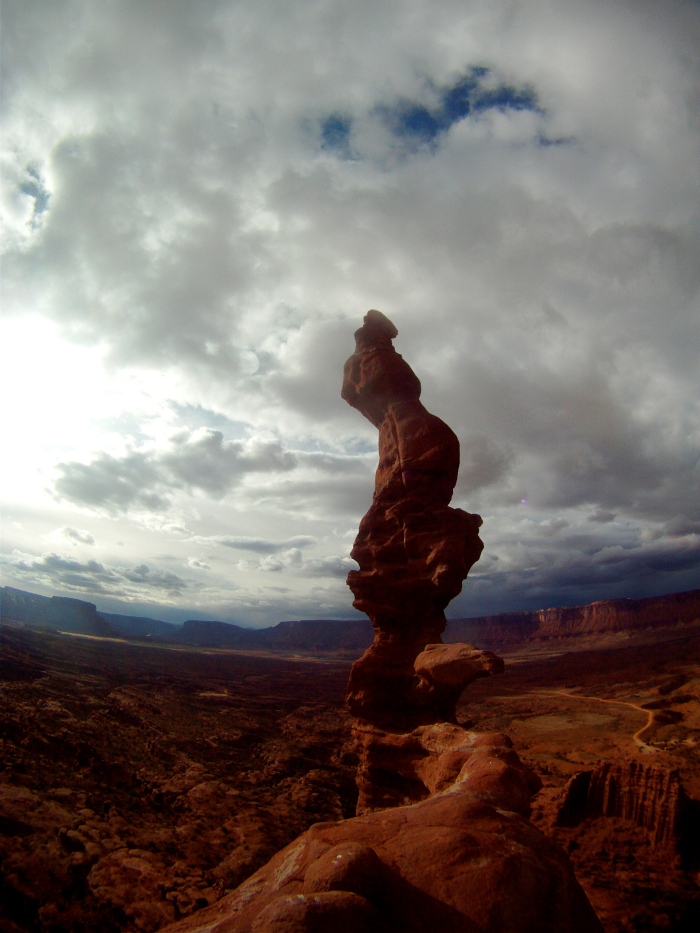 A few years ago, Trine and I talked incessantly about meeting up in Moab and doing some climbing. The plans never came to fruition, but we had always looked at the Fisher Towers area, including the Ancient Art route.

This year, a major bank released a commercial that features this route, and after seeing it a few times, I knew we needed to give it a shot on this trip. At the same time, it was my first time back to the Fisher Towers area since I was 13. That trip ended with me getting 28 stitches in my leg after a game of hide-and-seek got a little out of control and I tore my leg open on a small culvert. Eleven years later, that culvert is now completely covered by sediment.

The route is unique in that there is some tough face climbing, followed by a long, wonderful chimney climb, and then some really exposed face climbing for the last two pitches. Unfortunately, when we got to the top of the 3rd pitch, the winds combined with our fatigue to the point that we had to turn around. I really hope we’ll return to stand on top of that spire though.

3 thoughts on “Some New Experiences in Moab”