Way back in October, 2013, Davinia signed me up for the Lakeland Trails Coniston Marathon Challenge on July 6th, 2014, anticipating my eventual first visit to the United Kingdom. Fast forward to July 4th, 2014, and I was packing up everything I own in Kazakhstan to fly to London-Gatwick by way of Istanbul. My British buddy Tristan was flying directly to London-Heathrow that same morning, so he gave me a ride to the Almaty Airport to discover that my flight to Istanbul was delayed by two hours.

The Almaty Airport is designed with a barrier preventing the general public from being able to see the check-in desks, so I could not see which flights were available for check-in. I asked at the information desk outside the barrier about the Istanbul flight, and a lady said I would find out more during check-in. The informational screens only said the flight to Istanbul was delayed and nothing about checking in, so I assumed it would switch to check-in when it was ready. I said “see you later” to Tristan and his girlfriend Viki, and waited outside the barrier with my eyes on the information screens.

Author’s Note: I did not have the confidence to stop mid-marathon to take photos, so all photos except the one of Davinia and I and my finish are from the totally rad Lakeland Trails Facebook Page.

A half hour before the flight was scheduled to take-off, the information board switched to yellow for the flight, indicating check-in was open. I walked past the barrier to check in, and the hall was completely empty. Another guy from Germany followed me to check-in as well, but we both discovered that check-in had closed a half-hour ago, and now it was too late for us to check in.

I had somewhat of an anxiety attack at this point, as I had never missed a flight before. In addition, the people from Turkish Airlines at the airport, as well as every single person we dealt with from Turkish Airlines that day in Almaty, were completely unhelpful and, more often than not, rude and apathetic to our situation.

All we were told at the airport was to go to the Turkish Airlines office in Almaty to see if they could do something. Luckily, the German guy’s friend in Almaty had a huge van to accommodate my ski bag. We got to the offices in town, where they told us we had arrived late for the flight and even went so far to tease us that we had obviously been sleeping and missed check-in.

After two years of dealing with the most inept customer service providers in Almaty, I had never been driven to the point of using profanity when talking with strangers. Something about this day, however, caused me to raise my voice and let the F bomb fly several times when I told the people to stop telling me what they thought I had been doing that morning.

What ended up happening is that, because I had booked the flight through United using points, they said I had to talk to United to solve my problem. Otherwise, they had no interest in helping me beyond that, or even trying to sell me another flight the next day. Not surprised but incredibly angry with Turkish Airlines, I went back to my buddy Chris’ apartment, booked a flight to London-Luton through Istanbul that night on Air Astana and another Turkish Company that is not Turkish Airlines, and went back to the airport.

The security guards who were there in the morning recognized me, and after establishing that I was not drunk (but I told them that I would be later), let me check in. In Istanbul, I had a 12 hour layover, during which I had to deal with my baggage transfer. I had paid $120 USD in Almaty for my ski bag, and had to fight with the next company, AtlasJet, to ensure I would not have to pay again. I eventually got my way, but not after sleeping on a bench for the night and going through international transfer security twice.

I finally arrived in the rainy London-Luton airport almost 36 hours after Tristan had first picked me up in Almaty. I met Davinia and her father and stepmom, and we drove to Leamington Spa to drop of my stuff, and onward to Coniston for the marathon the next day.

After a good dinner at the Black Bull Inn (Bluebird Bitter is still the best English beer I’ve had), we stayed at a beautiful B&B in Hawkshead, where I was finally able to sleep in a bed before an early morning wake-up to get back to Coniston. The jet-lag helped at this stage, as I woke up earlier than the rest of my party, feeling refreshed with a good night’s sleep. We checked in at the start, and soon after I was running 42 kilometers of my first ever trail marathon, and my second marathon ever.

For two months before, I had been training for high-altitude mountain climbing, as I had attempted to climb the 7134 meter-high Peak Lenin at the end of June. My hope was that this altitude training would make-up for the lack of running that I had been doing. This happened for the most part, and I finished about fifteen minutes off my goal of 4 hours and 30 minutes.

Two #marathons done this year, this one was much better for the views rather than the performance though. Onwards to the next thing, whatever that might be. PC: Dav

What I did not anticipate was that I would lose feeling in my toes during the mountaineering mission in Kyrgyzstan, so I ended up running this marathon without feeling in most of my toes except pain when I ran downhill, especially on asphalt. Also, I had a bit too much caffeine before the race and not enough water, so after two amazing hours of running, I had a really bad cramp in my hamstring that slowed me down a lot, and I went from somewhere in the top-fifteen racers to the top-thirty.

I also did not anticipate being so well taken care of and such a beautiful run. The views of the lakes and the tarns on this race completely amazed me, and was such a nice introduction to my current location of England. Huge thank you to Davinia, her dad and her stepmom for providing transportation and accommodation. The people who planned this race did a fantastic job, so thanks to Lakeland Trails for the great event and I recommend this one if you can make it next year!

To see a map of the run and read more about Lakeland Trails, click here to see their webpage.

Davinia and I before the race 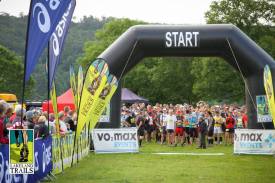 The start of the Coniston Marathon Challenge

View of Tarn Hows, my favorite part of the course and where I did my best running.

View just beyond where I cramped