For Spring Break 2014, during the first week of March, I decided to take my good buddy and PiA coworker Abram to my favorite town in Central Asia, Karakol. I had been in the area the year before, when I spent my spring break skiing out of a yurt with the awesome program that is 40 Tribes Backcountry. I had also been there the week before with my buddy Alex on a sporadic ski weekend that involved a good amount of buzkashi. Abram and I planned to ski and ride a bit at Karakol Ski Base, but the big thing we planned to do was run.

Because I had been to Karakol with Alex the week before, I knew that the snow at Karakol Ski Base was going to be sub-optimal, as it had been all year. Also, Abe and I were signed up to run the Almaty Marathon a month after this trip, so I thought it would be fun to go on a few training runs on the farm trails, and if we were lucky, try to run from town to the beautiful Issuk-Kul Lake.

We skied the first and second day, where Abram and I split up, and I was able to find a few amazing stashes that required a bit of hiking. I also discovered the main hike-to zones that many of my skiing friends raved about, which were good but sun-crusted. It was fun skiing nonetheless, and I would be happy to return when it is a bit deeper.

After the second day of skiing, I convinced Abe that an evening run was in order. We took off hoping to climb some of the hills above town, where we found ankle deep mud, knee deep snow, and a beautiful sunset.

We stayed at the always welcoming Sun House Hostel, where Sergey and crew made sure we were welcomed to clean sheets and perfect rooms every night. It was also where Abram and I discovered we have a special affinity for Bishkek Cognac, which would follow us all the way back to Almaty several months later. Abram and I spent one night in Bishkek before heading to Karakol with Sergey, and they had a special message for us the first night there, making it better than any 5-star hostel imaginable. 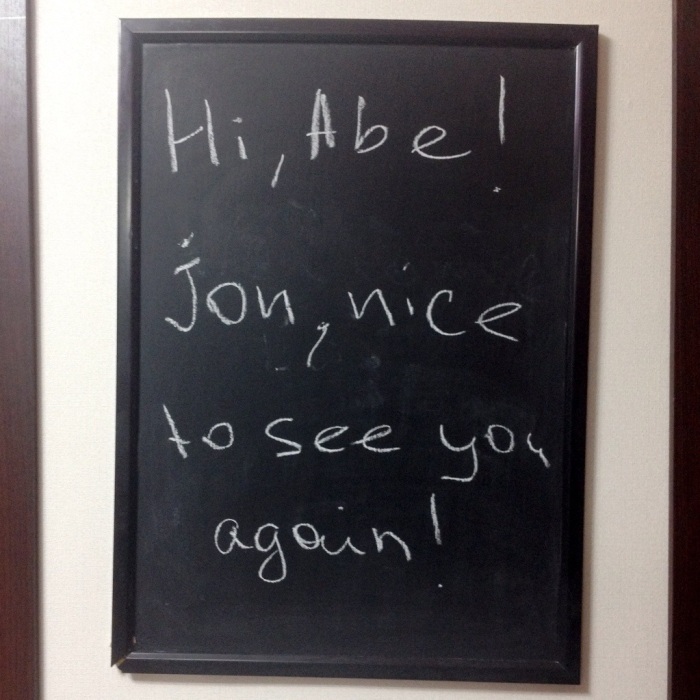 On our final full day in Karakol, Abram and I decided to put in some miles down to the big lake, but not before stopping by to see Akerim at the absolutely amazing Karakol Coffee for some espresso. We were also able to meet Ryan and Ptor of 40 Tribes since they had some self-guided clients that week at the yurts, and they were as stoked and as awesome as ever. We had had dinner with them a few times that week as well, and it was fantastic to catch up and talk about backcountry skiing in Kyrgyzstan and throughout the world. After some caffeine, laughs, and “see you laters,” Abe and I started off.

We found the Karakol-Suu, a river we intended to follow to the lake, and settled in for a long one. We passed through a small village and an Islamic graveyard before finding some country roads that pointed in the right direction.

Beside a few dogs that did not enjoy our presence, it wasn’t too long before we found the biggest obstacle to the run, which was ankle deep mud that was extra slippery. We had to walk for long sections, which definitely took the wind out of our sails. At the same time, the farms we ran next to had made holding reservoirs from the river, so the path to the lake became less and less clear the further we went. Luckily, these reservoirs made for some nice shots of Abram.

After a few miles of walking/running because of mud and an unclear route, we found a dead end at a frozen reservoir and decided to turn back. We ran a total of 31 kilometers round-trip, which was pretty good all things considered, and definitely helped with the marathon a month later. We were probably a bit early for a proper trail running training visit, but I’m glad that didn’t hold us back too much.

This trip was also special to me since it is the last time I will see Karakol for a while, and being able to see all of the great people there and share some laughs was awesome, especially with Sergey, Akerim, Ryan and Ptor. Plus, I had never seen Abram more stoked on a new place, so I’m glad the experience was shared with someone who appreciated it. You can read about his thoughts on the entire trip on his blog. Until next time, Karakol!

Still frozen, time to turn around

Panorama from the top of the hill above Karakol. For an interactive version of this photo, click on it.

A view of the hike-to zones at Karakol Ski Base

Abram and one of the first reservoirs we negotiated

Finding a way through slick mud and snow

Abe on Run 1 at Sunset

Islamic Cemetery along the Karakol-Suu

Runners get funny looks from cows too