The final stop of our tour of Uzbekistan was to visit Helen in Tashkent. Helen had shown us around a bit when we first arrived, but more importantly, she essentially organized all the practical stuff for us, including picking us up at the airport, getting train tickets and som for us before arrival, and even letting us borrow a cell phone in case of emergency. Needless to say, she made this trip incredible and incredibly easy, so it was great to be able to spend a day with her in her current city. Thanks again Helen!

Our first stop for the last day was an attempt to see the oldest Koran in the world in the Khast Imom complex. Unfortunately, the museum was closed, so we meandered the square before seeing what might be considered the highlight of the city, Chorsu Bazaar. The massive egg-like building that normally houses the main part of the bazaar was under renovation, however, so we walked through tents of vendors selling fruits and meats under a hot sun before heading to the main eatery location for Tashkent-style plov.

I have had a number of students from Uzbekistan while working in Almaty, and three of them had advised me to make sure I try both Samarkand plov and Tashkent plov. The main difference between the two, in theory, is that Samarkand plov is cooked with the rice separate from the meat and carrots, whereas in Tashkent plov it is all cooked together. Blinded by the incredible goodness from the Samarkand bazaar plov, Saranna, Eli and I anxiously ordered bowls of plov in the Chorsu bazaar. The Tashkent plov was notably different, probably because no one else in the complex was eating it, unlike in Samarkand where we had to wait for a table because everyone within a mile radius was eating the delicious concoction. This lack of freshness would strike back not too long after arriving in Almaty that night, and, to put it lightly, Eli’s predictions of “Timur’s Revenge” came to pass.

Before the flight back, however, we walked from Chorsu to Mustaqillik maydoni, or Independence Square. The place was pristine, new, and, for the most part, pretty empty. Tashkent does not lack police nor rules that prevent anyone from really enjoying things, especially the manicured green grass you are required to not walk on or photos of the living-museum style metro system. We returned to Helen’s to collect our things before heading back to Almaty and returning to work. It was a successful trip, considering we had used a couple of “sick days” to make it happen, and almost had to use some when we got back.

See the gallery below for some shots from our first walk around Tashkent after arriving in Uzbekistan.

The Chorsu Cafeteria under a shashlik smoke-screen 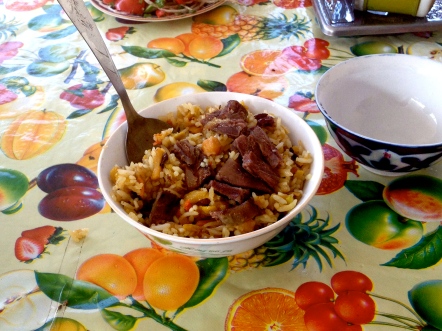 Timur’s Revenge, or the Tashkent plov that did us in… 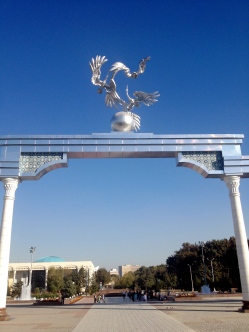 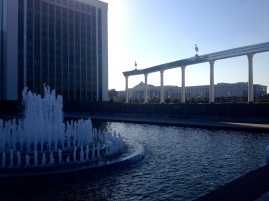 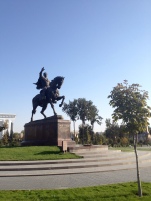 Statue of Timur in the Timur Square

Museum of the Timurids

Inside the Museum of the Timurids 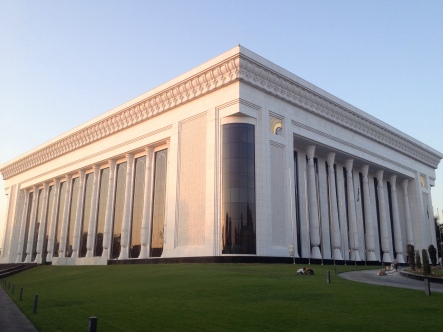