Samarkand is awesome. While I definitely enjoyed Bukhara more due to its dusty, unrefined appeal, Samarkand is nothing to sneeze at. Within the city, the number of photos I took was dominated by The Registan, but there was a huge amount of ancient mosques, mausoleums, and medressahs to explore, along with ancient desert relics from long-gone civilizations and a lively bazaar. Samarkand was also home of the best Central Asian cuisine I have had the pleasure of tasting in all of my travels throughout Kazakhstan, Kyrgyzstan, and other parts of Uzbekistan.

Saranna and I spent the first day exploring the mausoleum of Timur (Tamerlane), the ruler of these parts in the 13th century. The inside, although beautiful, was crammed with European tourists, so we retreated to the rear of the building. We were heckled by the cute children, one of whom shouted “Hello!” only to to be told by an older child not to say that because we were Russian (not sure why he thought that). Suddenly a man appeared from one of the doors leading underground, beckoning us to join him. Assuming we were heading to a private tour of the crypt because we were having fun entertaining the children, we anxiously descended the stairs to find…a souvenir shop. Saranna pointed out we had been duped by the cute kids and their parents taking advantage of our foolishness. We politely declined buying scarves and whatnot, and made our way to find the Laghman center on the other side of town.

The next day, we met up with Eli and tried to walk from The Registan to Afrosiab. Along the way, we stopped by the Bibi-Khanym Mosque and Shah-I-Zinda, or the Avenue of Mausoleums. Both of these stops were incredibly impressive, the Bibi-Khanym was simply massive and beautiful, and the intricacies of the Shah-I-Zinda were astounding. Both places, however, featured the same bus-loads of European tourists, combined with men hawking poorly made guide books of varying languages. Such is life in such a tourist town.

On the way to Shah-I-Zinda, Eli befriended some lovely older ladies on a pilgrimage to see the grave of Quasam ibn-Abbas, the cousin of the Prophet Mohammed, buried beneath the Avenue of Mausoleums. They informed us we should take a taxi to Afrosiab, the ancient part of Samarkand that has been swallowed by desert. We went a few miles in the wrong direction before figuring out the driver thought we were going to the Hotel Afrosiab. Saranna’s persistent questioning combined with Eli’s Russian led to a U-turn and a stop at the proper location.

Afrosiab was a major civilization in the 7th century, and the museum nearby is pretty good for learning about what has been discovered there. Unfortunately, the area around the museum and the locations of where the excavations took place are pretty hard to find. We wandered around for a while before finding some holes, and then walked to find the Tomb of the Old Testament Prophet Daniel, near the Siob river, not far from Afrosiab.

Tired from getting up at sunrise and exploring so much ancient history, we found one last cab for the day and decided to find some Samarkand plov and souvenirs at the Siob bazaar. This was my favorite bazaar in Central Asia, it was massive yet very clean with defined sections for all types of food and goods. We ate the best plov in Central Asia at the Siob Bazaar Stolovaya, ate more than a few free samples of halva, and I was able to complete the majority of my Christmas shopping. We parted ways from Eli, collected our things from the wonderful Jahongir B&B, and returned to the train station to head to our last stop of the trip, Tashkent.

Gur-E-Amir Mausoleum, the final resting place of Timur and his grandson Ulugbek

Chandelier inside the Gur-E-Amir Mausoleum. The inside was simply beautiful 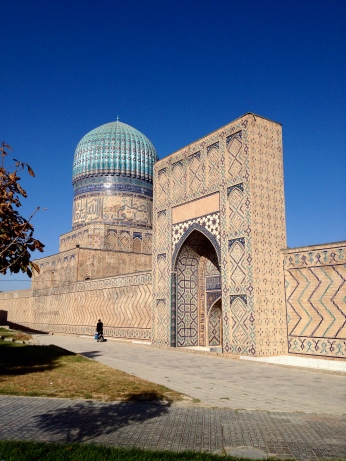 Koran stand in the Bibi-Khanym 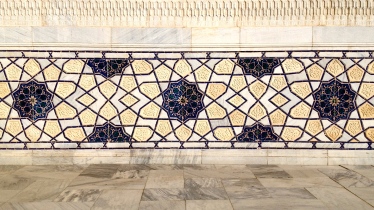 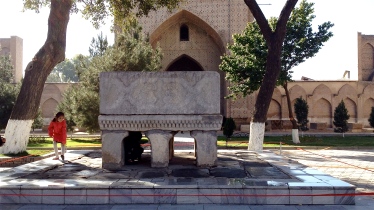 Kids crawling beneath the Koran stand, doing so will make women more fertile, according to the legends 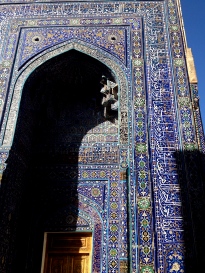 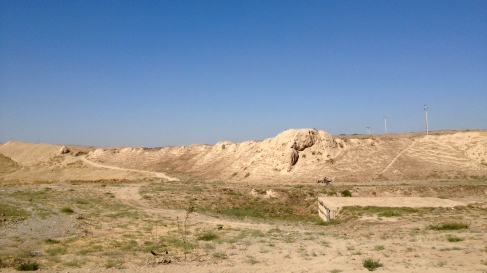 Doorway between Afrosiab and the Tomb of the Prophet Daniel 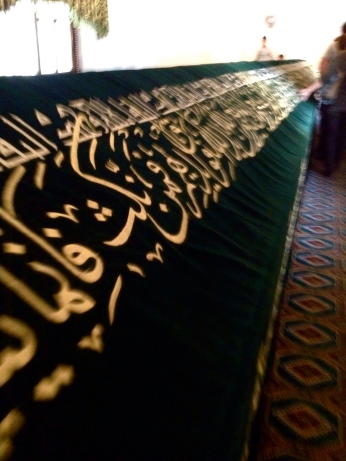 Tomb of the Old Testament Prophet Daniel. Apparently he still grows a half inch every year

Samarkand Plov in the Siob Bazaar