I had no expectation what so ever I would find myself on a summit above 10,000 feet in Indonesia during sunrise.

John had mentioned climbing Mount Lawu when we were ascending the road in Jogorogo, but it seemed like it might not happen, so I didn’t push it. But when John mentioned he was thinking about it to Haniek, his coworker, she went out of her way to make it happen, including putting us in touch with her relative who had climbed it several times before. We descended from Jogorogo via mini-van to our homebase in Paron for a quick check in with John’s host family, then made our way through Paron to talk to Very (Haniek’s relative) about the route, who then decided to come with us. Haniek’s unending hospitality continued well beyond belief as she drove (well, her family friend drove) us for a few hours up to what would be considered base camp, where there was a slight drizzle.

Very, John and I set out in the middle of the night. I had been ski touring quite a bit in Kazakhstan before this trip, and the thick air so close to the equator powered me up quicker than expected. It felt good to climb the trail, until, about halfway there, indigestion from all the delicious yet foreign food kicked in with a vengeance, and I had to pull off the trail for a wilder-poop. Normally, when hiking such a peak in more Alpine conditions, I would have been S.O.L. for something to wipe with, but here, in what could be considered to be a jungle, I found out that Elephant Ear Leaves are the best leaves in the world for cleaning one’s bottom. I will never look at them the same way again, whether I see them in the foliage of South East Asia or the Botanical Gardens of the United States.

I did not take many pictures on the way up either, since it was quite dark on the trail. After about 3.5 hours of climbing, we made it to a large hut in the middle of the night. The sweat from the climb, combined with the slight drizzle that had not stopped throughout the entire hike, made it seem quite chilly at the hut. We entered, however, and found a bunch of rugs laid out for sleeping purposes. We put on every layer we had since we did not have sleeping bags, and tried to take a nap. 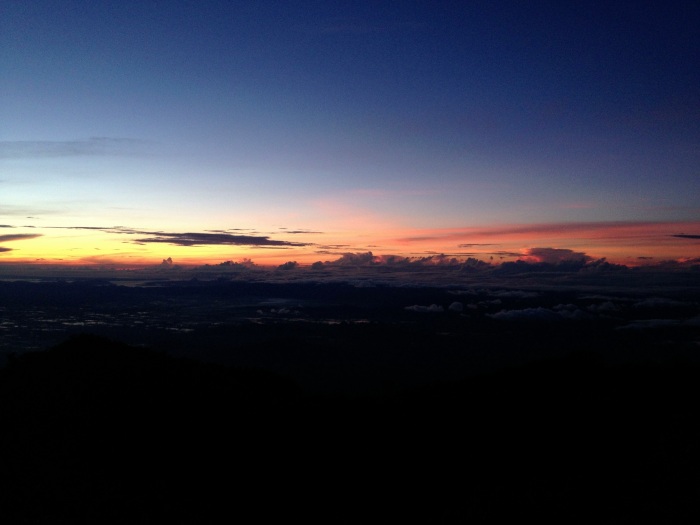 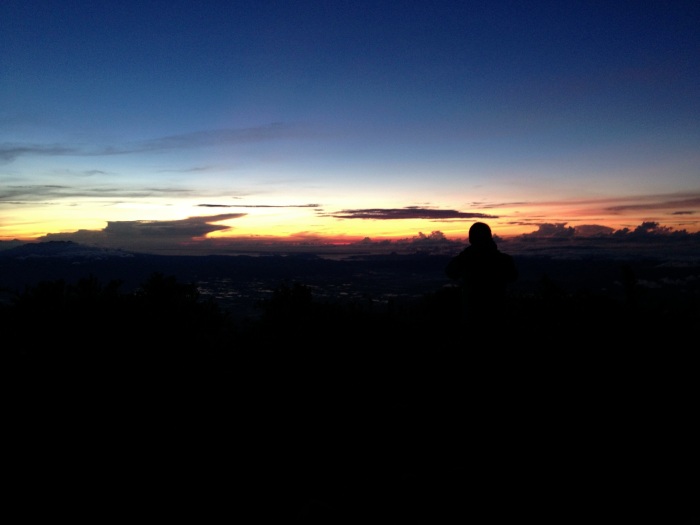 I hardly slept, thanks to cold feet (which would end up in my empty backpack as an extra layer) and plenty of mice running about the lodging (I didn’t have any food in my pack, but other parties in the cabin did). But, sometime around 4am, John nudged me awake so we could make the final approach to the summit. Very was up too, but made it about 20 meters from the door before he retreated back inside for warmth. I will admit that I also did not expect to feel cold while in Indonesia, but something about the damp air at that elevation sucked the heat from my bones in a way I had never experienced. John and I found the summit marker quickly, just before light appeared to the east. We watched, waited, and walked around quite a bit trying to stay warm.

In 2005 I was traveling internationally for the first time near Cologne, Germany, checking out World Youth Day. My good friend Bryce and I stayed up all night to watch the sunrise, which was anticlimactic due to overcast skies that would remain for the entire day. After retreating to get some sleep before the Pope’s Mass was to start, I awoke less than an hour later surrounded by Italians singing church songs with smiles on their faces greeting the new day. It was as if the sun rising on that particular morning was a religious experience to be celebrated by all.

During sunrise atop Lawu, while watching the first lights of the rising sun spread across Eastern Java, I could hear dozens of minaret towers coming to life with the beautiful Muslim call to prayer. This happened every day during my time in Indonesia, but to hear it happen as the sun rose from such a great height called the experience in Cologne back to memory, as if to remind me that every day should be treated as something special, that every day should be celebrated, and that I am a very lucky individual for having the experiences that I have had, and my fantastic family and friends around the world. 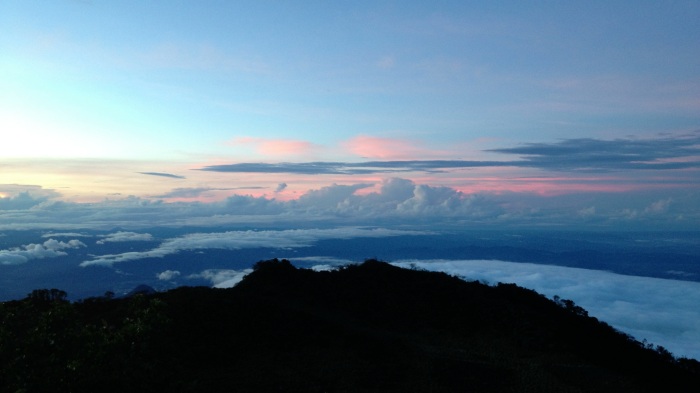 John and I were mostly silent, taking in the sensational beauty all around us. At some point, it was decided that photos needed to be taken with each other in them, and not long after John unfurled a Colorado State Flag that I had first seen tacked to the wall of his room in Paron. We took quite a few photos in the early morning light, none of which needed much post-processing, seeing how the light was simply perfect.

Gunung Lawu is a mountain that straddles the border between East and Central Java. It rises to 3265 meters, or 10,712 feet. It is a lone peak, far from any summit nearby. So, once the light got bright enough to the east, we turned around and saw the largest mountain shadow I have ever seen. We hiked out a bit on the west flank to try to get the best angles of it, and were not disappointed.

Eventually, the sun was up entirely past the eastern horizon, and we descended down to check on Very. He was still quite a bit cold, but explored the high camp with us a little bit. Sites included a Javanese temple, a house built entirely from bottles and reused packaging, and a few awesome murals.

We enjoyed the early morning blue skies for an hour before the rainy season cloud cover moved in quickly. We started our descent, taking plenty of pictures along the way of things we did not see during the night climb.

The descent was not unlike many mountains I’ve hiked throughout Colorado, in other words, longer than I remembered and full of discussion about beer and food we couldn’t wait to get to at the bottom of the trail. We passed through intermittent drizzles the whole way down before we finally arrived where we started, at what would be considered the base camp.

John made the necessary phone calls for a ride, but we retreated into a cafe for some food and refreshment while we waited. I decided to try a Bintang (Star) Beer, even though it was 10am, and watched John and Very’s eyes open and close as they drifted in and out of sleep. Before long, after they both had some of the most sugary tea I had ever tasted, and I finished my expensive, flavorless beer, our roles reversed, and I drifted out of consciousness.

I awoke to the sounds of some local school kids entering the cafe. I snapped over 100 photos during the 12 hours we spent on the mountain, but I am fairly sure that when the 20 school kids finally worked up the courage to ask, they took well over that number of themselves posing with the two out-of-place bules. Very simply laughed at us as we tried to smile despite our exhaustion. The kids left, Haniek and her family arrived, and we started the drive back to Paron. On the way, we stopped at the gorgeous Sarangan Lake for lunch and sightseeing. The views provided by this high mountain lake were simply incredible, but my fatigue prevented me from taking too many photos, which probably would have warranted another blog post strictly for the lake.

A few days later, after arriving back in Paron, it was time to take the sketchy bus back to Surabaya, go back to the airport, and leave the country of Indonesia. The time I spent in East Java was undoubtedly incredible because of the friendly people, wonderful food, and being able to see where one of my best friends has been living for almost two years now. But to be able to climb Lawu and see such an incredible sunrise next to a great friend transformed the experience into something like that first trip to Cologne in 2005; it was a trip that increased my passion for both international travel and my love of mountains further than ever before.

I am thankful for all of my friends and family around the globe that have supported me in my journeys across the world. This post is for you. 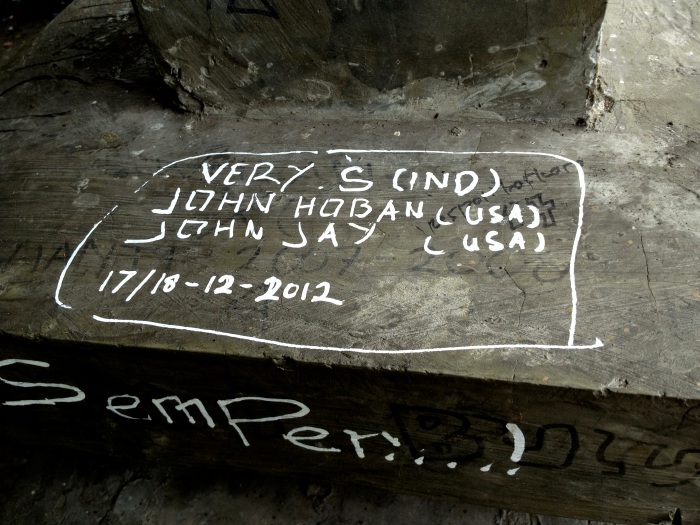