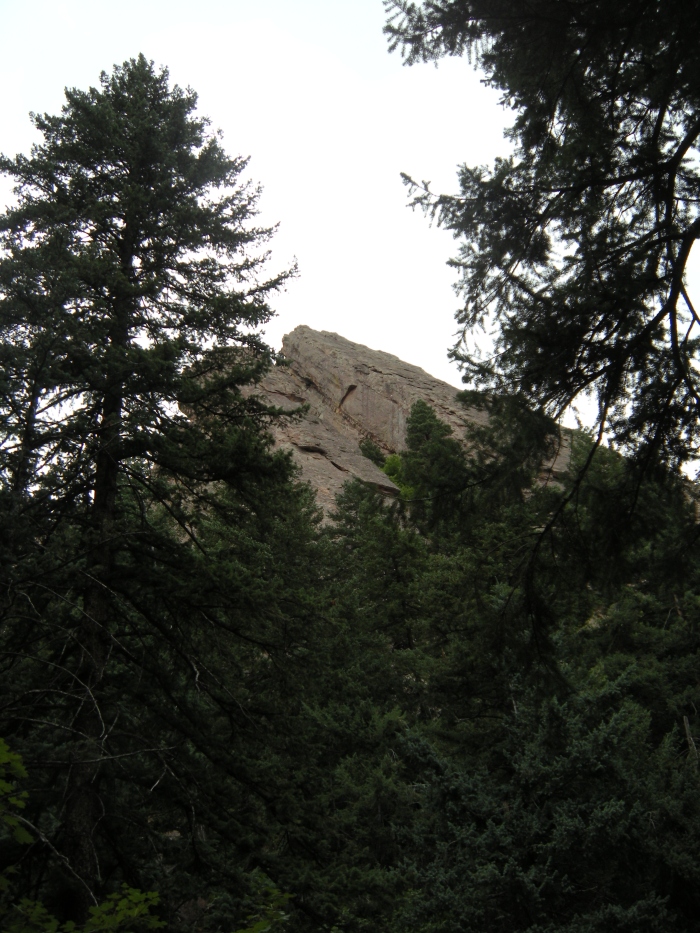 One thing that certainly stands out from August, however, was having the opportunity to climb my first multi-pitch trad route on the 3rd Flatiron outside of Boulder, Colorado. I hiked to the nearby Royal Arch earlier this summer, and decided I needed to climb this route sooner than later. Most people free-solo it, but my friend Erin and I had never done a multi-pitch climb, and I knew this would be a great place to practice techniques I’d only read about. Also, I’ve been getting feedback that my blog is fairly male-dominated, which is unfortunate because all but one of my repeat-climbing partners over the summer have been some pretty awesome women. Erin saved my butt when I took a big whipper earlier this summer at Clear Creek, and recently left Denver for a five month adventure in Uganda, so I am proud to have gotten this one last climb in with her.

Erin had to work at noon on this particular day, so we started out from Denver pretty early. We got slightly turned around on the approach and probably lost about a half-hour, but with about two and half hours of climbing ahead of us, I thought an 8:30am start on the rock would be fine. We were joined by one other party on the rock, and we let them go ahead because they had been their before.

Erin misplaced a contact lens, and after a few minutes of searching, she decided to leave it behind and climb in glasses. We went over commands and anchors (there are seven or eight fixed-eye bolts on the 3rd Flatiron, perfect for personal anchoring as well as belaying from the anchor), and began the ascent. The first few pitches flew by before Erin had to take care of some personal business anchored into a tree, but we continued on shortly after.

I realized by the forth or fifth pitch that my amazing Mammut Tusk 70m rope could easily double up the pitches, so I did exactly that as I crossed the ancient “CU” paint on the Flatiron. Erin claimed I had about three feet of rope left, but that was all I needed to anchor in and safely belay her up.

The final pitch did not feature a fixed bolt, so I got to practice my anchor-building skills. The belay platform was fairly large and flat, so one Metolius Master Cam and a slinged horn was all we needed to finish up the climb.

From the top of the 3rd Flatiron, a series of three rappels await. The third and final one, known as “Friday’s Folly,” was 120 feet. Easily the longest rappel I have ever done, and left us about two feet of rope when we touched the ground. Grateful for our safety knots, Erin and I high-fived before transitioning into trail shoes for the hike out.

With all the set backs during the day, we were cutting it close to get Erin to work at noon. Unfortunately, I got us lost on the descent and we ended up bushwhacking our way to the car at about 1pm, meaning Erin was already a half hour late for work with a 45 minute drive back to Denver ahead of us. She was a real trooper though, and even got me some coffee when I got her to work.

Other than the time issues, we had a complete blast, and I am stoked for her to enjoy her adventure in Africa. Be sure to follow her travels here: http://erinuganda.blogspot.com/.

I start grad school one week from Monday, so the adventures will be dwindling until ski season starts. I do have some more 14er gnar planned, as well as some more (much steeper) multi-pitch climbing planned, so I will be sure to update as much as my computer allows.