I don’t think I’ll ever forget when i go the text from my buddy Jon about Shane McConkey’s passing back in late March. I thought it was some viral joke on newschoolers.com, but I excused myself from the group to double check. Sure enough, with a little help from Google News, it was confirmed. One of my childhood icons, one I had never met, had passed in a BASE jumping accident.

Nearly every ski and outdoor magazine that came out this fall had some sort of tribute to Shane. Blog posts from around the ski world gave tribute to him. But, a couple weeks ago, the Matchstick Production’s ski movie tour came around to Denver, and they are featuring a “Saucer Boy” Contest at each stop. As soon as I got a bunch of posters to put up around DU and read about it, I knew that there was no better way to honor one of my heroes.

I was the first or second guy to show up for the contest that night, and I knew I had some good competition, but when all was said and done, and a lot of help from my friends at the show, I ended up taking home the win. I was humbled by it, thanking the crew I was with relentlessly.

But, nothing can really explain how powerful the tribute at the end of this year’s MSP movie is. I laughed, cried, and laughed some more. People that had never heard of Shane until the accident were watery eyed, including Darcy, who was actually crying harder than anyone else I saw. I have to admit, the part of the montage when he is jumping on the bed and then gets his eye really close to the camera was a shot from Global Storming, which was the first ski movie I had ever seen, one that I watched almost every day for two years until we got Ski Movie 2. That movie came out in 1999, a decade ago, and if you watch his part in Claim, he still had the same style of going absolutely huge off of almost anything, better than anyone else, then or now.

But, as the ski areas start to open here in Colorado, and the stoke factor for me is higher than it ever has been for a season, I can’t help but realize that all I really want to do is “just ski down there and jump off something for cryin’ out loud!” 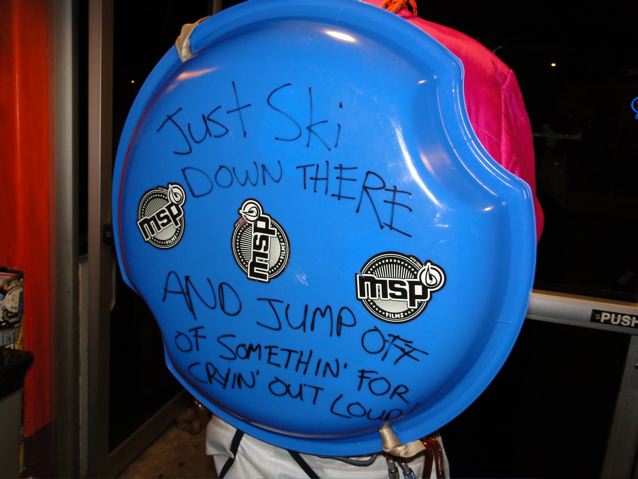