This post is for all of my friends I spent last Autumn with in Sweden! You’re all awesome and I miss you a ton. I hope you’re having a great time where ever you are!

On my flight from Washington, DC to Colorado, I somehow got the flights mixed up and I realized that I had somehow returned to Sweden for the past week. I have no idea why, but the plane did not go to Stockholm, rather, we landed on the west side of Lake Vänern. I knew I was there because of the canal locks that I had previously visited.

After being completely befuddled by where I was and the familiarity of the on-looker, I couldn’t help but think about how awesome the first time I saw canal locks was with Shelley, Cate, Wes, and the rest of my Nordic Environmental Studies Crew.

I walked south and discovered the strangest building downstream from the canals. It looked like it was straight out of a box you could buy at Ikea. And I was doubly confused by the Swedish and American flag intermingling with one another.

Opposite this strangely built (but clearly Swedish) building, I did throughly enjoy the waterfront view of the modern, squatty archetechture, and it simply looked like a much larger version of the Karlstad City Museum, or at least was built by the same architect. The addition of the waterfront and the bridge were enough to keep me throughly convinced I was in Sweden, and probably very near to Karlstad.

Still confused, I tried to find my way back to the airport via the canals, when I ran into the most familiar person. I could have sworn it was Casey, but this girl had bright pink hair and didn’t know a word of English. From my weak, ill-practiced Swedish, I could determine she had roots in the island of Öland, but otherwise I couldn’t learn anything else about her. She accompanied me to take some more photos of the canals, had some ice cream with me, and then went on her way. 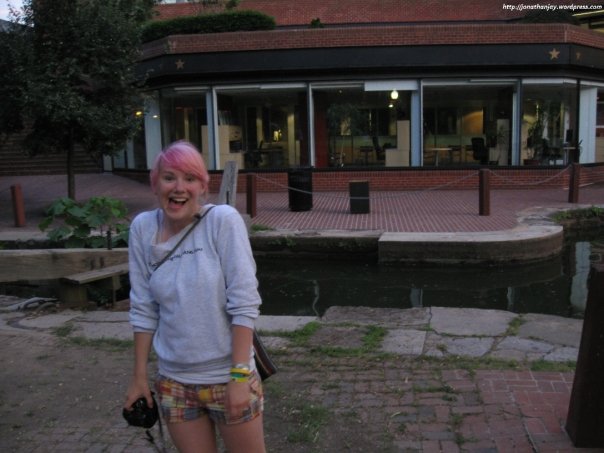 I couldn’t find the airport, so I returned to the areas with buildings. With no where to stay, I ended up walking the streets all night, vaguely familiar to my In Flames weekend in Gothenburg with Laurent. After waking up at the train station, I meandered the streets a little longer and discovered the absolute proof I was back in Sweden.

Inside, I met yet another good-looking Swedish girl (who also really familiar). She didn’t speak a word of English either, but from what I could gather from my quickly-improving Swedish was that she had roots in the Hanöbukten area, or the “Glass Coast.” She ended up taking pity on my rather poor financial situation and the bad exchange rates and bought me a pretty nice sweater, claiming that I have poor style (I think my translation might be a little off, because lets face it, I have great style).

Afterwards, she took me into a government building (which was really strange because we weren’t in Stockholm) and I was able to get this shot of her in a welcoming room. The room was very classical, and somewhat familiar to what I remember from visiting Stadhuset when I was in Stockholm with Marc, Shelley, Cate, and Melanie.

After she left, I was extremely confused and worried. I knew I was in Sweden, but I had no idea where I was in Sweden! With the government buildings, Karlstad-ish architecture, and the canal locks, it was as if I was somehow revisiting my entire time abroad last August, September, and October. Not wanting to spend a second night on the streets (again, remembering Gothenburg), I found help back at the strange Ikea build-a-building. I walked inside, hopeful to get information, and they showed me the latest in Swedish technology. I can’t give the details, but let’s just say Sweden is way ahead of the rest of the world in terms of time-space inventions. Suddenly, I found myself at the Swedish Embassy in Washington, DC, just in time to make my flight back to Colorado (again).

One thought on “Tillbaka i Sverige?”