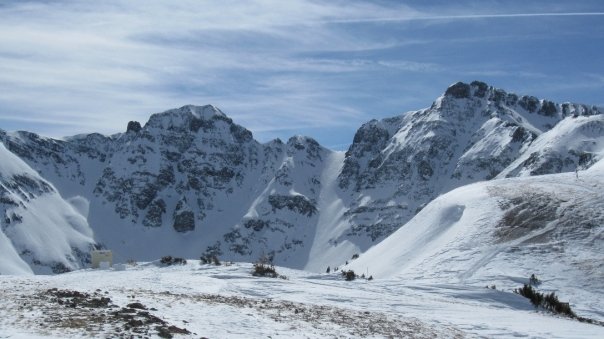 So every year I take at least one trip to Silverton, Colorado. Usually it’s just one trip with the DU Alpine Club, but sometimes I’ll get lucky and go down there twice with friend and family during the unguided season. It is easily the gnarliest lift-accessed terrain in Colorado, and probably amongst the top three in the lower 48 states. This year I was in a crew that was half DU students, including my roommate Troy and two freshmen Trine and Ross, and the other half of the crew was some shop rats from Steamboat who were total rippers and let me ride a pair of Volkl Kuros for a run. It was one of the best days of the year for me, but I could not get a single shot of someone skiing to turn out. Luckily the sky was a deep shade of azure with not a cloud for miles, so naturally the camera was constantly clicking for some shots of the San Juans. Here are some of the best shots of the day.

It was a pretty amazing trip and we had a blast skiing Monarch on the way back home on Sunday.

It’s looking like I’ll be climbing either Mt. Elbert or Oxford and Belford this Saturday, but otherwise I’ll be taking it easy getting a lot of work done for school here in Denver. I’ll be spending an entire week in the Little Cottonwood Canyon starting a week from Sunday with the Alpine Club, and my brother Steve might stop by too, so there is bound to be some rippage, maybe a little carnage. We’ll see. Either way keep your eyes open for a trip report on a 14er or two this Saturday or for Utah in a few weeks.