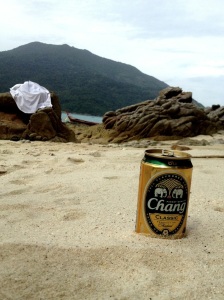 One of the biggest highlights was when John and I rented a tandem sea kayak and paddled to an island just north of Koh Lipe, called Koh Adang. Koh Adang is a nature preserve, and no one but the park rangers are allowed to live on the island. When we found the deserted beach on its western shore, John described it very accurately by saying it was "like walking into a stock photograph in your computer's screensaver."