On September 7th, 2013, my good buddies Matt and Riley invited me along to a mountaineering mission in one of my favorite zones. The goal was to climb Пик Учитель (Teacher Peak, 4045 meters) and then do the technical traverse to Пик Пионер (Pioneer Peak, 4031 meters). I had attempted Pioneer before, but did not succeed. Plus, it was one of the last times I would be able to climb with Riley in Kazakhstan, so I was in. After an early start, a long approach on a road I’ve walked a lot, and a hike up to Alpengrad, we were in one of my favorite places in the Ile-Alatau mountains.

After a beautiful sunrise and a run in with a herd of cattle, we made quick work of the climb to Alpengrad, and then made the loose, steep ascent of Teacher Pass. Despite hints of trails, it was virtually impossible not to send rocks screaming downhill, so we spread out and did not hike in single file for the most part.

This part was probably the least fun part of the day, but sooner than later we arrived at the top unscathed from rock fall. We found ourselves above a snowfield that was just a little too steep to descend without ice axes, which we didn’t have anyways, so we roped up. I put Riley on belay to lower him down, but when he arrived at the bottom he noticed that if we were to try glissading, we would likely end up 1000 meters below on Bogdonavitch glacier. I sacrificed a sling and Matt and I rappelled down rather than risk a very long slide down to a place we were not supposed to go.

This rappel put us on the footstep of the summit block of Teacher Peak. Like most of the mountains in this zone, Teacher Peak has a summit block that was only about two-pitches long, which means we had to haul all our protection and rope up for a relatively simple climb. But because we were doing the traverse (and already had to rappel), we were to use the rope and pro a lot more today, which made everything even more fun.

The first pitch was a body-sized chimney that only had one tough mantle, so we skipped roping up and carefully make our way up the car-sized boulders. We topped out easy enough, but then saw enough pitons and rebar to indicate this next zone would require a bit more than a mantle.

Riley led, I seconded and mostly simul-climbed with Matt cleaning. This was about as tough as the climbing got (low class 5 but with a lot of exposure), and at the top it was just a quick scramble to the summit.

With our first summit down, we moved on to the traverse. I had been on exposed traverses before (Ringing the Bells comes to mind), but since we were in Kazakhstan, we didn’t leave anything to risk and roped up fairly quickly after the summit. After the section featured in the photo at the top of this post, we rappelled again, and then did not need the rope for the rest of the day, despite a bit of tricky route finding.

The summit of Pioneer Peak was much more exposed than the small dome of Teacher Peak. We snapped photos, especially of the steep north face. I spent a good amount of reflecting on this zone, gazing at Amangeldi Peak, Komsomol Peak, Chimbulak Peak, and so many others that I have had such an amazing time exploring. This is a truly amazing zone that has very much influenced my alpine skills.

Before long, we made our move to descend Pioneer to Pioneer Pass and back to Alpengrad. I found out that the zone I had turned around on during a prior attempt was only ten meters from the summit. Live and learn, I guess.

Descending Pioneer Pass is about 900 times better than ascending it, so we sort of carefully ran down the scree back to Alpengrad, and then carefully descended down the marbles between Alpengrad and the road. It was a fantastic day and a great way to welcome Autumn after a pretty wild summer in the mountains.

Huge thanks to Riley for doing most of the leading and Matt for snapping the majority of the good photos on the day. Let’s do it again sometime, fellas!

The Glacier at Alpengrad. This has been the inspiration for countless Kazakh artists, based on a visit to the National Art Museum last autumn

Riley near the top of Teacher Pass. Photo: Matt

Riley and I evaluating how to get down, with our first objective rising in the background. Photo: Matt

Your author rappelling down

Me climbing up to the first pitch. Photo: Matt 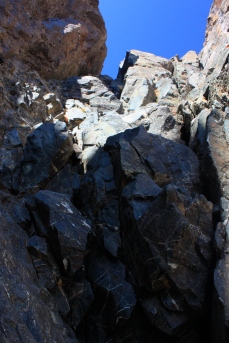 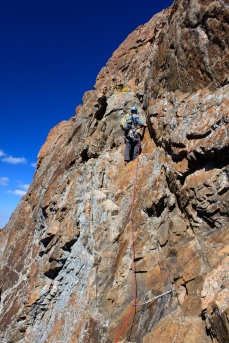 Riley on the sharp end of the first very exposed zone. Photo: Matt 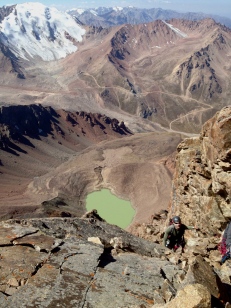 Matt topping out with the Alpengrad glacial lake far below

Riley working his way towards Pioneer

Your author on the last hard part. Photo: Matt

The Crew on Pioneer with Teacher Peak behind

Me thinking about how rad this place is. Photo: Matt

Riley working his way down Pioneer peak at the zone I turned around at last time. Photo: Matt 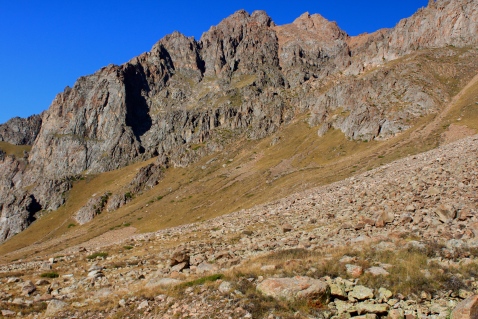 The one that started it in Kazakhstan, Amangeldi

One thought on “Teacher & Pioneer”