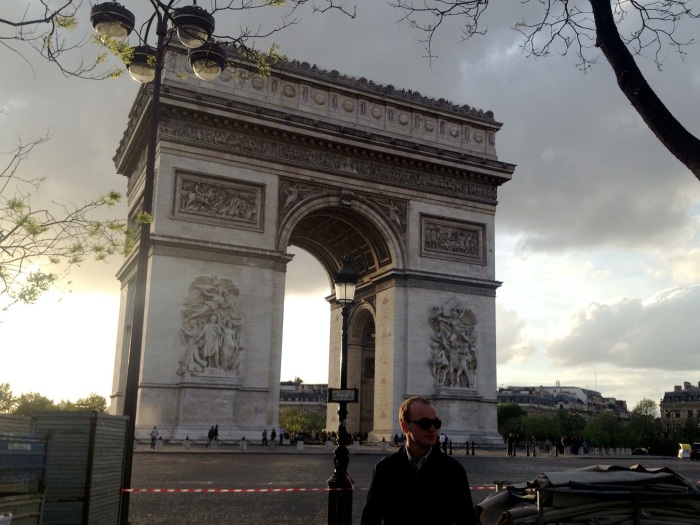 Paris is a very special place for me. I first traveled there from Cologne, Germany in August, 2005 during my first trip outside of the United States. I returned in June, 2006 with many of my high school French classmates, and then again with my brother Zack and his lovely wife Sara in December, 2008. While I absolutely love the city and will return there without hesitation in the future many times, I had never visited in the Spring, which is probably the most romanticized season to spend in the Capitol of France.

Like the visit in 2008, this was to be a very short day in the city. One could easily spend a lifetime there and still find something new every day, so it was bittersweet to only spend so little time there again. We walked from Gare du Nord to the Notre Dame, and then, after some shopping in the Latin Quarter, took the metro to the Musée d’Orsay, another place I had visited in 2006, but was happy to return and I had a feeling my parents would enjoy it.

Pictures are forbidden in the museum, but with the beauty that is an iPhone, I took a few sneaky ones of my favorite bits of art when security was looking the other way.

I was correct in my hypothesis that my parents would enjoy the d’Orsay; my mom even stated, and I paraphrase, that it might be her favorite museum ever. We crossed the Seine and walked the Champs Elysee from the Louvre all the way to the Arc de Triumph, which is tied with the tent at the base of Silverton Mountain as my favorite little spot in the world. We watched the sun set, then made our way back to Gare du Nord, and then to the airport where I saw my parents off before heading back to Amsterdam to meet Maria.

It was awesome to see my parents again, as well as Maria, Marc and Shelley in The Netherlands. Besides layovers, this was the shortest amount of time I have spent in Europe since my first visit in 2005, but every time I return it feels like a second home because of the awesome people I meet. Huge thank you to my parents for helping get me there, I hope my navigation skills were a bit of compensation!