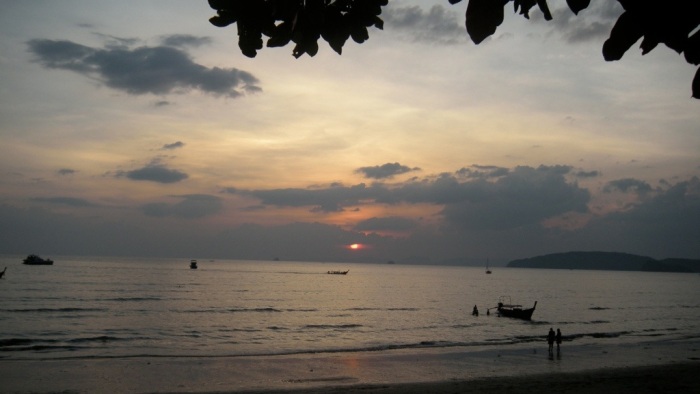 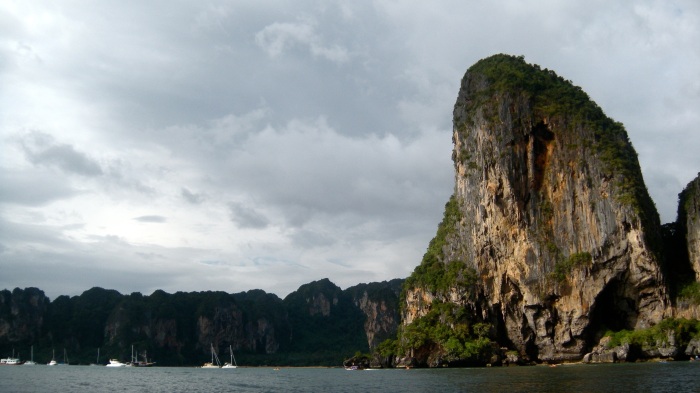 From Koh Lipe, John and I took a ferry from the island to the mainland, where we then took a long bus ride to Krabi. In Krabi, we found that we would be staying at a small resort of bungalows in between Krabi and Ao Nang, but I had designed this part of the trip so we would be able to check out Railay Beach and Ton Sai. Unfortunately, our accommodations were a ten minute tuk-tuk ride from the beach at Ao Nang, which was a 20 minute water-taxi ride from Ton Sai. We made the most of it, however, by getting to know are (very young) tuk-tuk driver over the course of 4 days, and starting the legend of Muay Thai in the process.

After figuring out the differences between the two separate Railay Beaches and Ton Sai, we quickly started just going to Ton Sai for the younger crowd. I had hauled my minimal climbing equipment in hopes of climbing here, and after making some friends on a slackline, I went out to a crag for a climb. I felt bad about leaving John behind, but this was made up for later when he out-climbed me when we went deep-water free-soloing later on.

My new climbing acquantainces were mostly happy to have me tag along for a climb, but when we arrived at Cobra wall, it was apparent there were a lot of people climbing, so I wouldn’t get to climb too much.

In the end, I only was able to sit patiently and climb one route, but it led to the best view I’ve ever seen at the top of a single-pitch sport route.

The next few days, we went on a deep-water free-solo climbing trip (which is the next post) and meandered around the Railay beaches, and discovered a pretty rad cave. On Years Eve, John and I braved another tandem sea kayak to paddle around some of the massive rocks off the western point of the peninsula. Once again, this activity proved to be one of the highlights of the 3 week trip.

After turning in the kayak, we evaluated the options on Ton Sai for the best place to post up for New Years Eve. After perusing a few different places, we stumbled into one where a couple of guys were asking the audience if any one can play the drums. I stepped in, and proceeded to jam out with some other tourists playing an odd mix of mellow jazzy stuff with a touch of reggae when some local guys joined in. We played right up to the countdown, and then watched some pretty rad fireworks taking place on the beaches all around. It was a very different place compared to dancing in a bar in Silverton like I did the year prior, but both were undoubtedly some of the most fun I’ve ever had for New Years.

At some point during our stay outside of Ao Nang, during one of John and I’s usual candid conversations, we chatted a bit about how lucky we have been about where we were and where we were living, and somehow came upon the idea of by telling people about our lives that haven’t had our experiences, we should give ourselves hi-fives mid-conversation. It was one of the funniest things on the whole trip, and I still get a chuckle about it writing this eight months later.

The one “splurge” on this trip was staying at one of the nicer hotels on Railay Beach on New Years. Unfortunately I booked it on the opposite side of the peninsula from Ton Sai, but we stumbled through the jungle and made it back to air-conditioned beds without issue. On New Year’s Day, John and I braved some high-seas with a gypsy boat driver and made it back to Krabi, where we took the overnight bus to Bangkok.