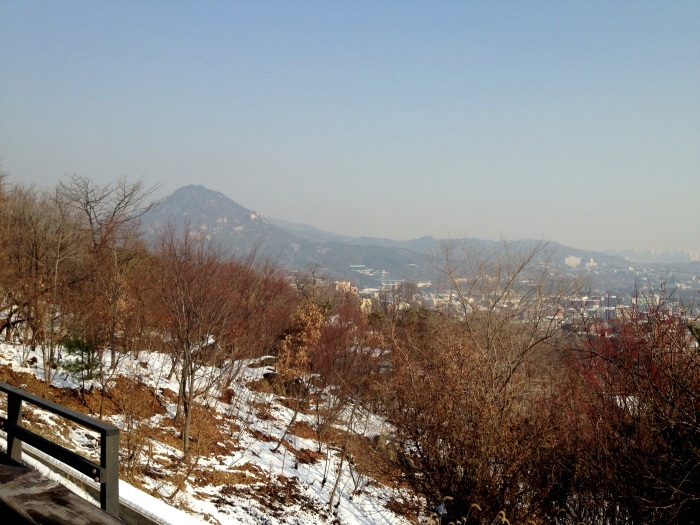 After finding a free map aboard the AREX Airport Train, I discovered there is a trail that runs through Seoul along a fortress wall that was built long ago. I had read during research that a trip to the top of Bugaksan Mountain (342m) is a great way to stretch one’s legs, which sounded nice since I still had a lot of travel ahead of me before Indonesia.

After getting slightly lost, I eventually found signs that pointed me towards the “Fortress Wall Trail,” which I knew would lead me to the base of Bugaksan. I ended up on the main trail of Inwangsan Mountain, but kept following my nose (and asking plenty of military guards near Inwangsan trailhead) towards Bugaksan, which was visible for much of the walk.

One thing I noticed while walking was that the trees between the Inwangsan trailhead and the Bugaksan trailhead completely engulfed me; I could have sworn I was walking in a Swedish forest rather than the third most populated city in the world.

After exiting the trees and finding and photographing a few of the gazebo-like structures, I found the check-in location. I had never had to show my passport and wear a permit to climb a mountain before, but then again, I had never been to Seoul before.

The stairs felt wonderful for my sleepy legs, and it wasn’t long before I found myself looking at a hazy skyline from the 342 meter summit of Mt. Bugaksan.

Later on, as I dined on kimchi fried rice in Samcheong-dong, I reflected on my little layover hike, and realized that Seoul is a pretty great place, with its wonderful architecture, pleasant nature escapes, and very nice people. I will gladly return if given the opportunity in the future, and I would love to explore more of the nature of South Korea in the future.