Last week, before venturing on An American Roadtrip, I did the Bozeman Tritons Sprint Triathlon with my brother Zack, his wife Sara, and my mother. My brother Steve is coming along nicely after his gnarly ski injury, but not well enough to enter the tri. Luckily for me, that meant he could document the day with his photographic prowess (all but the last 3 photos were taken by him).

Prior to the event, I had competed with my brother Zack on Facebook in the art of smack-talking. Unfortunately for him, it was simply not a good weekend for road biking. On a quick ride the day before the race, a freak malfunction on his bike led to some gnarly road-rash and a tacoed back wheel. The day of the race, after beating me by thirty seconds out of the water (and continuing to gain time on me for the first few miles of the bike), he suffered a flat tire followed by a broken spare tube, which put him about 20 minutes behind. I think, if he hadn’t had such setbacks, it would have been a very close race, especially considering how my run time was 3 minutes faster than his. 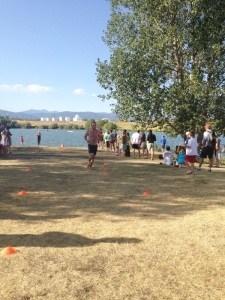 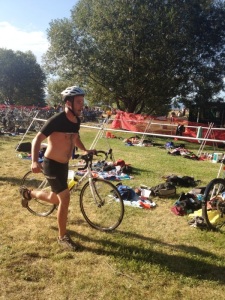 When all was said and done, I had a good showing, coming in 1st for my age group, 5th in the men’s category, and 7th overall. I was 3rd out of the water and 6th on the footrace, but my rather dismal 24th on the bike could definitely be improved upon (step 1: buy a real road bike, and don’t use a rental in the race). Overall, I had an absolute blast with my family and the triathlon, so I definitely plan on doing more of these in the future.

While I was certainly stoked for Zack, Sara, and especially my mom for finishing, the real winner of the weekend was my Dad, who competed in the half-Ironman competition of the race. We completed our entire 0.5 mile swim, 13.5 mile bike and 3.5 mile run during the time he was only on the 50+ mile bike portion of his event. It took him 6 hours and 17 minutes to complete the grueling race, and he was pooped at the end to say the least. Way to go pops!

Editor’s Note: Some of you might know that I was supposed to fly to Germany today, and Kazakhstan on Thursday, but due to issues in acquiring a visa, those plans have been put on hold until further notice. I might do one more post this week covering my favorite photos of the past year in the Roaring Fork Valley, but ideally I will have something from a far-away timezone within the next week or so. Until then, check out my fellow Princeton in Asia fellow Julia’s Tumblr (she’s already there).

One thought on “Bozeman Tritons Triathlon 2012”