I apologize. I started off January with back-to-back-to-back posts, all of which were great, and then nothing cool happened worthy of its own post. School’s back in session, and work, and my internship, and skiing (of course), so there has been little time for catching up anyways.

For the most part, I have been skiing by my lonesome for one reason or another at A-Basin. Since I am without any mounts or cases for my helmet camera, I cannot document some of the lines I have been getting after. Also, skiing alone was also been a source of frustration for me, and it got to the point where I created a unpublished blog post with a survey entitled “Why Don’t You Ski with Jon Jay Anymore?” (Some of the better answers included “Because I only ski A-Basin when nothing else is open,” “Because I have two dates in Breck at the same time and gotta juggle that somehow,” and “I don’t even know the guy. I thought I was shopping at www.pharnorth.com?”) Luckily, three out of the last four times I have been up, I have had great crews to ski with. Plus, that one time I didn’t ski with anyone, I got to hit a drop with freeski legend Chris Tatsuno. Those four days cheered me up enough to not publish that survey, and probably prevented me from making most of my good friends (and certainly my favorite people to ski with) very angry with me (another one of the answers on the survey: “Because Jon Jay is an asshole”).

I keep telling my good friend John to get out of Glenwood Springs. Luckily, he finally got his invite for the Peace Corps and is going halfway around the world in a few months, which is good, because the South Pacific is as far away from Glenwood as I can possibly imagine.

Luckily, before he heads to California to visit his brother before the Peace Corps, we were able to hike up from Vail Pass, where we avoided getting run-over by snowmobiles, caught up on life, and had two great runs on the backside of Shrine Mountain.

For two weeks after Vail Pass, I skied almost entirely alone, save for one day with Caressa that led to a shattered Marker Duke, and a few run-ins with fellow friends from DU and Cross Clothing. After five days of driving up alone and simply not being able to connect with people, I was finally able to convince a few undergraduates to join me for a day up there. All it took was the promise of a ride, deep snow, and homemade pizza afterwards, but at least someone finally went skiing with me!

The very next day, Collin and Max came up, and we proceeded to jump off everything in sight. I have never seen A-Basin so filled in, it has been great!

With all the laughter, air, and deep snow, it’s great to know that we are only about to start the February of this Great Winter.

You might know that January isn’t quite over for me yet, and hopefully you’ll hear about my travels through different sources during the next week. Since the next two weeks will be very busy for me, be sure to keep your eyes on my Twitter Feed for brief messages while I’m in Wyoming and California, and I’m sure I’ll be able to catch you up on what happened in both places soon enough. 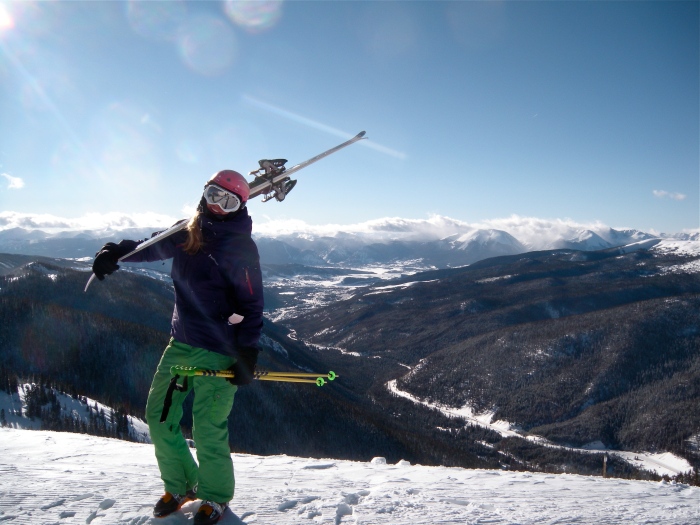 See you on the road or in the air!