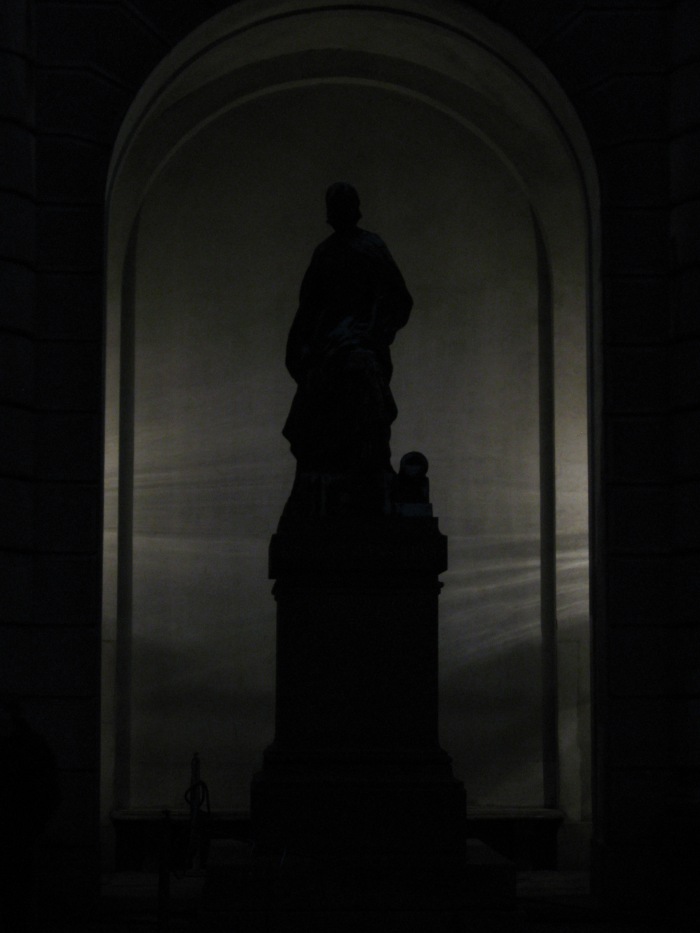 So I’m writing to you know from the absolutely amazing l’Hôtel du Bois in Les Houches, France after a great day of skiing, but I thought I’d write a final post about the five fantastic months I spent living in Sweden, all of which started coming to an end when I got back from Helsinki on November 30th.

After my trip to Finland, I had some time between my plane’s arrival and my bus’ departure to Karlstad to walk the streets of Stockholm one last time. It was very reminiscent of the first hour I spent on Swedish soil way back on August 18th (that seems ages ago, but then again it feels like yesterday). This time, however, I knew my way around, so I knew about a few places I had to see in the fading light that November afternoon.

The first stop was the NK store because, as I stated in another post about Stockholm, I really wanted to see that place during Christmas time, and I was not disappointed. The display windows were all created to be Christmas-themed animatronic (sp?) shows. There were the type of things one would see in the movies when families go to the city, and kids watch each display for a long time letting their imaginations fly. I had never actually seen one outside of A Christmas Story, so it was pretty cool so see some of these in real life. And they were all surrounded by small children and their parents. My favorite was definitely the banjo-playing alligators.

After this I took a brief walk through Ostermalm to see some city lights on my way to Gamla Stan. They did not disappoint.

It was also really cool to walk around Gamla Stan for the last time (for a while, I think). I made sure I stopped by all the places I had visited with people I was in Stockholm with, such as Saint George and the Dragon, which my parents loved, or the Stora Torget architecture I had first seen with Marc, Cate, Shelley, and Melanie, and was now full of people and booths for the traditional Christmas Market. I also made sure to stop by the Royal Palace, which was the first stop when I visited Stockholm for a day with my North American friends (and Shelley!), as well as a probably the only place I went to every time I visited Stockholm. The Royal Palace in the night was certainly a cool thing to see as well, and the picture at the top of this post was also taken there.

After getting a little watery eyed in Gamla Stan, thinking about all the great memories I had in that fantastic place, I made my way to the building I had hoped to see so badly so many times I came here, Stadhuset. I cannot tell you why I love this building so much, but there is something about it that just makes me so awe-struck every time I see it I cannot help but love it. It really is my favorite building on earth, and it was a powerful experience to see it that night for the last time on this trip.

Besides my trip to Lapland, my early December was fully devoted to the city of Karlstad, as well as the wonderful nature that surrounds it. It was mostly covered in snow for the last two weeks, so I made sure I tied up my boots at least once every other day to take a walk and just enjoy the forest. I tooke a few pictures during some of my wanderings, so I hope you enjoy them.

If I wasn’t out in the forest, I also spent a lot of time in Karlstad. The city was fairly well prepped for the holiday season, complete with lights and a large Christmas tree in Stora Torget.

I actually made it to the Värmland Museum, and after thoroughly reading everything we could about Värmland’s history, my friend and I discovered the kid’s science displays to be the coolest things ever, and we didn’t actually make it to the rest of the museum before it closed. Another reason to return to Karlstad, I guess.

Finally, the last week of my time here in Karlstad was filled with plenty of time with friends, and far too many “goodbyes.” I spent a lot of time at my favorite place in Karlstad, Pitcher’s Pub, meeting up with friends from all kinds of backgrounds from all over the world, and then afterward I would have to say goodbye to some, but see you later for most.

I also had an early birthday celebration with many of my closest friends. The funny thing is that the Canadian Cate and I share the same birthday (she is exactly one year older than I am) so it was an early birthday celebration for both of us, and luckily we have mostly the same friends, so we had this rather large feast of spaghetti that I cooked myself. Here are some pictures my friend Maria snapped at the event.

After the dinner, everyone pitched in apparently and got me a Färjestad BK (the local hockey team) t-shirt and hat, and the also got me a Swedish flag that all of them had signed, which to me is as valuable as gold. It was a truly awesome thing because because of the date of my birthday, I rarely have friends over or parties of any sort outside of small dinners with my family, so to have all these close friends over was something that really made me feel good. The most important thing was that all of my friends were there, and that they all were really sincere about the whole thing. I think that the best thing for me in Karlstad was to meet all of these wonderful students from all over the world, and that we all got along with each other so well it is amazing just thinking about it now. I shall never forget the last five months of my life because of the amazing people that I met and the memories we made together. So, to any of those awesome people from Karlstad Fall Semester 2008 are reading this, tack så mycket (thank you very much) for everything, you have significantly changed my life, and I will never forget that. Please keep in touch.

One thought on “My Final Weeks of Swedish Living”