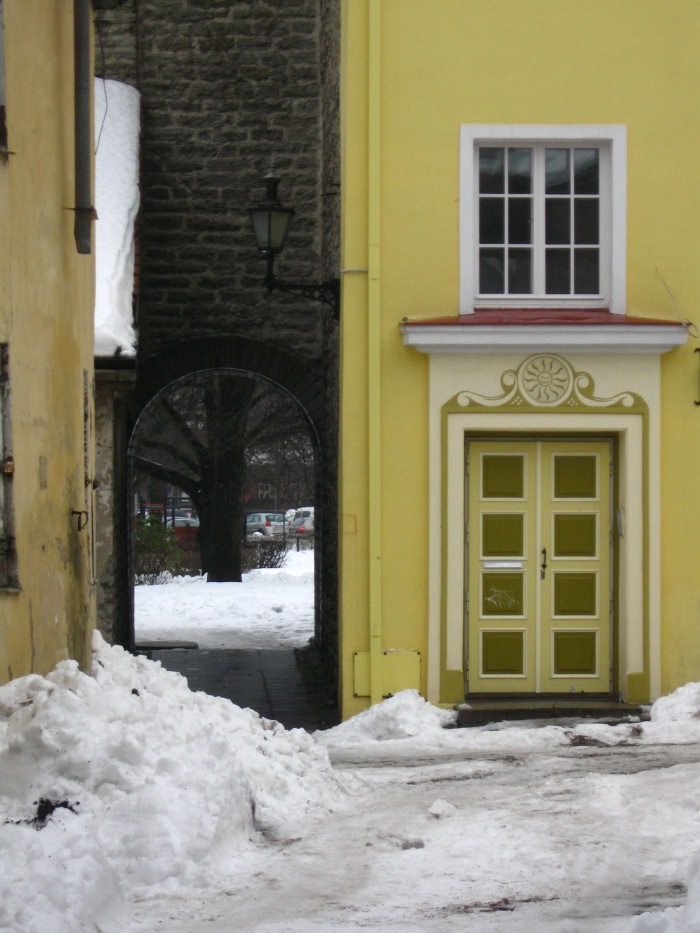 After my first day in Helsinki (which is the post you SHOULD start with before reading this one), I took the ferry to the capitol of Estonia to check out the medieval city there. It was my third medieval European city that is on the UNESCO World Heritage list (along with Carcasonne and Bruges) and it is my favorite so far. It’s not in the best condition, but the way the bright colors of some buildings contrasted with the really old city wall and the gray Baltic sky really makes some beautiful images, many of which I attempted to capture with my camera, as would be expected by anyone who has read this blog before.

Right after getting off the 3 hour boat ride, I knew I came to a cool place, and it got better and better as I saw more of the city. I meandered the narrow cobblestone streets for about 4 hours, with my camera continually clicking, except when I would stop for a few moments just to take it all in. Here are some pictures from the day.

After a few stops in another Orthodox Church and another Lutheran Church, I made my way to the City Hall square. The city hall building is one of the oldest still-used civil buildings in the world, and was a definite highlight. Plus the medieval booths in a Christmas market nearby only made the experience that much cooler.

After some people-watching near city hall, I stopped by Katariina Käik, or Kathrine’s Street, which is a famous part of Old Tallinn because there are several artist guilds there with galleries right inside their work places. I had to hold back from purchasing some beautiful hand-made leather bound journals, but was able to watch them being made, as well as some stained glass painting, pottery, quilting, and more glass blowing. The people there were also super friendly, and willing to talk without attempting to sell anything. In Tallinn, as well as in Helsinki, whenever people would ask where I was from and I replied with the United States, every one replied with the same answer: “Wow, that’s a long ways away.” My trip to Riga was the furthest I have felt way from the USA in terms of culture, but these two places, with their adjacency to Russia and very visible Russian influences, were not far behind. It makes me wonder how Moscow would feel to visit, or even St. Petersburg. More traveling for later I suppose!

After wandering around the streets some more, I made my way back to the ship and then back to Helsinki. It was Thanksgiving night, and my goal was to have a nice plate of traditional Finnish reindeer for dinner, but decided against the 28€ plate that was recommended by my guide book. Instead, I treated myself to a delicious turkey sandwich from a Subway, and also had a nice conversation with the girl working there about Finland and the Swedish that is spoken there.

After my day at the Kiasma Museum of Contemporary Art, I spent my 4th and final day in Helsinki at Suomenlinna, or Sveaborg (in Swedish), or Finland’s Castle (in English). Suomenlinna is an island fortress that is a 15 minute ferry ride from Helsinki’s main harbor, and, like Tallinn, is a UNESCO World Heritage Site. It was built while Finland was a part of Sweden in the early 1700’s, and has never been conquered, although it was given to the Russians when they were in control of Finland. Because it has never been conquered, I have heard it described as “Gibraltar of the North,” but it definitely does not have a massive rock like I thought it might as implied by the comparison. It was similar to the Varberg Fortress on Sweden’s west coast or the Akerhus Fortress in Oslo, except it was much larger and took up 3 entire islands as opposed to a section of the coast. There were also lots of people dressed up in old Finnish soldier costumes because of the Holiday, so that was a pleasant surprise as well.

Soon after landing, I made the discovery that you are free to roam inside any of the passageways in the fortress’ walls, something that I kept wishing I could do while I was at Varberg and Akerhus. It made the whole trip worth while just to walk in and explore these old cave-like walls.

After exploring the passage ways, I continued my walk around the fortress, always poking my head in any open door just to see inside.

At the end of the walk I discovered the King’s Gate, or the royal entrance to the fortress.

I walked back from the King’s Gate along the coast, and stopped to examine many of the massive Russian cannons that lined the wall.

Finally, I made it back to the harbor, but just before I was rewarded with this picture of the Tourist Info Center and Main Museum, with the Church Tower/Lighthouse in the background. 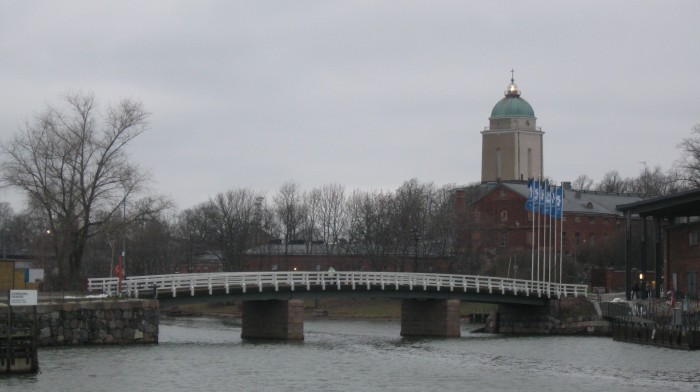 Then, after a night in the airport, I made my way back over the Baltic to a beautifully lit-up Stockholm, where I walked for a few hours before heading home to Karlstad. It was probably my last amount of time in Stockholm during my time here in Sweden, so I may or may not put up a tribute post to what is currently my favorite major city in the world sometime before I leave. Let me know if you really want to see one, because I’m undecided at this point. Otherwise, thanks for all of your comments and emails, I’m glad to hear I’ve inspired at least one person to not just travel more, but to travel to some out-of-the-way places that don’t involve capitol cities, or involve cities at all I hope. This Friday I’ll be doing just that, traveling up to Abisko National Park, just east of Kiruna, for some dogsledding, skiing, snowmobiling, and hopefully some northern lights. I’ll be sure to let you know how it goes.

One thought on “Tallinn & Suomenlinna”