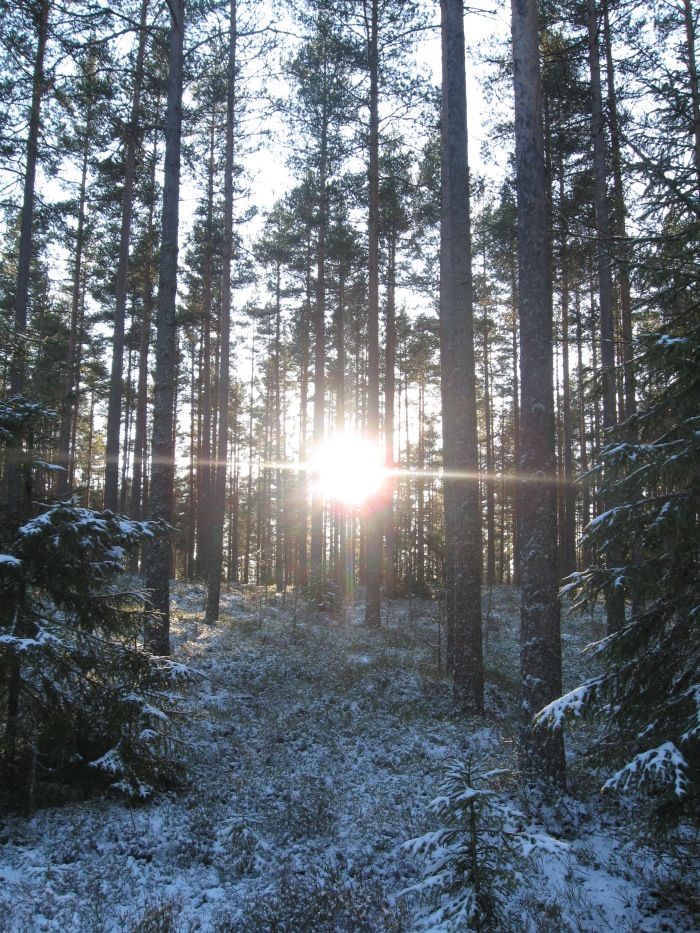 Hello everyone! So looking at my past few posts I have realized it’s been a while since I’ve had a decent post dedicated entirely to Sweden. And this November, aside from a day trip to Riga and 4 days in Helsinki, has been spent entirely here in this fantastic Nordic country. So I thought it might be a good idea to update you about the travels I’ve been doing here in this awesome country I currently call home. Enjoy!

Last week my Dutch friend Shelley, my Italian friends Clara and Corrina, and I decided to go to a Swedish hockey game to support the local professional team, Färjestads BK. For some strange reason, it is 50 Swedish crowns cheaper to sit on the glass at Löftsbergs Lila Arena than it is to sit anywhere else on the first deck, so we went for it and ended up in the first row, ten seats down from the visiting team’s penalty box. In the end Färjestads BK beat Skellefteå by two goals, but overall Färjestad hasn’t been having the best season, so tickets are still cheap, and I’ll probably be back in December. Here are some pictures from the match.

The day after the hockey match, I took a train down to the small town of Falkenburg, located south on the “Swedish Rivera” to visit Karl-Gustave and Anne-Marie, a Swedish couple that was Darcy’s mom’s host family when Marisa spent a summer in Sweden when she was in high school. I met Anne-Marie at the train station, and, as we talked on the drive from Falkenberg to Alberg, I felt super welcome and as if I were visiting Darcy’s third set of grandparents (I left two days later wishing they were MY third set of grandparents). I also got to meet their daughter Hannah and her husband Andreas, and their actual grandchildren Clara and Leo. I also met Karl-Gustave’s cousin Judy, who spends time between Seattle and Sweden. Spending time in their home was as if the “Culture Smart: Sweden” book my mom had given me had come to life, everything from shoe removal to toasting etiquette to the food we ate that night.

The next day, Karl-Gustave and Anne-Marie drove me up to Varberg, another small town on the Swedish Rivera (Tip: if you are visiting the Swedish Rivera, or anywhere in Sweden for that matter, I highly recommend not coming in November unless you like ridiculously strong winds and continual off-and-on again downpours. I’m fairly sure at this point that the real reason Swedish people leave in December isn’t because of the darkness, but because they need a vacation after living here in November). Here are some pictures from Varberg:

After the town we went out on the island just north of town to see a bird-reserve and education center, as well as the island itself.

The final stop in Varberg was the fortress located just south of the Nature Reserve, which also featured a museum about the history of the farms and homes located in Halland, or the region of Sweden where Karl-Gustave and Anne-Marie live.

After the fortress we stopped at a salmon restaurant which had the best salmon I’ve had yet here in Sweden, and then returned back to their home where we looked at pictures and talked about how Darcy and I need to come visit them in the future. Then, the next morning, before they drove me to the train station, I took a few pictures of their house before leaving.

From the Ohlson household I went straight to Stockholm for my cruise to Riga, fresh with advice from Anne-Marie on what to do and see while I was there. Karl-Gustave and Anne-Marie are probably some of the nicest people I have ever met, the “nicest of the nice” here in Scandinavia, and my trip to see them was probably the most Swedish thing I have done here. Thank you a ton Marisa for helping me find them!

Two days after my return from Latvia, I went on the final field trip with my Nordic Environmental Studies Class to a tiny Swedish town known as Älvsjöhyttan, located on the eastern Värmland border. Much to my enjoyment, there was a solid 2 centimeters of snow on the ground in some places, which was the first snow I have seen since Norway. The class, for the most part, was an introduction to Eco-Philosophy, of which I am not a big fan. I’ll just leave it at that. But the place we went was pretty cool. Here are some pictures from the trip:

And now I’m back in the freshly snow-dusted Karlstad. I was thinking about going to Stockholm today for a ski festival, but I decided instead to stay home and catch up on work and sleep. Next Tuesday I’ll be going to Finland for 4 days, which might involve another metal concert and another day in another Baltic State, Estonia. This will be followed by a trip to the far north of Sweden, and then a trip to the French Alps to meet Zack and Sara for some ski action in the Chamonix valley. For the exact dates of my travels, check out My Travel Schedule. This reminds me I’ll be back in ColoRADICAL in a month now, where there are things I’m really excited to return to, as well as things that I’m not at all excited to leave here in Sweden. I really do love it here and I have made some amazing friendships and experiences over the past 4 months. It will be hard to leave.