Hello again! I am sorry for the delay between Part 1 and Part 2 of this post, but I recently got a job for DU admissions to blog about life as a DU student (both abroad and when I get back) so I decided to meet the deadline I was given and put this entire trip, pictures and all, in an extremely condensed version of a blog for prospective DU students. That means that I had to leave out most of the pictures and anything about beer, so I guess it was pretty easy in the end. OK, continuing my trip…

Bruges is a UNESCO World Heritage Site and is considered to be the best preserved medieval city in Europe. I would not have known a thing about it, however, except I had a chance to see the movie “In Bruges,” which stars Colin Farrell and Ralph Fiennes. I highly recommend the movie, but be forewarned you too will want to visit the city afterwards. After leaving Amsterdam and changing trains in Antwerp, I arrived in Bruges around 4:30PM, and had to find my way to the hostel. Here are some pictures from the walk, which may or may not have involved a long detour similar to what happened in Amsterdam.

I did find the central square fairly quickly, which is where a lot of the movie takes place.

At about 5:30PM I finally found my hostel, and then when out to see some of the sights. Unfortunately almost everything closed at 5PM, so that severely limited my options. I did get to see the Church of the Holy Blood, which contains a vial of Christ’s blood that a knight brought back from the Crusades, but I didn’t actually get to see the vial itself.

So, with little to do after the Church, I walked around and took pictures of some of the beautiful buildings and canals. 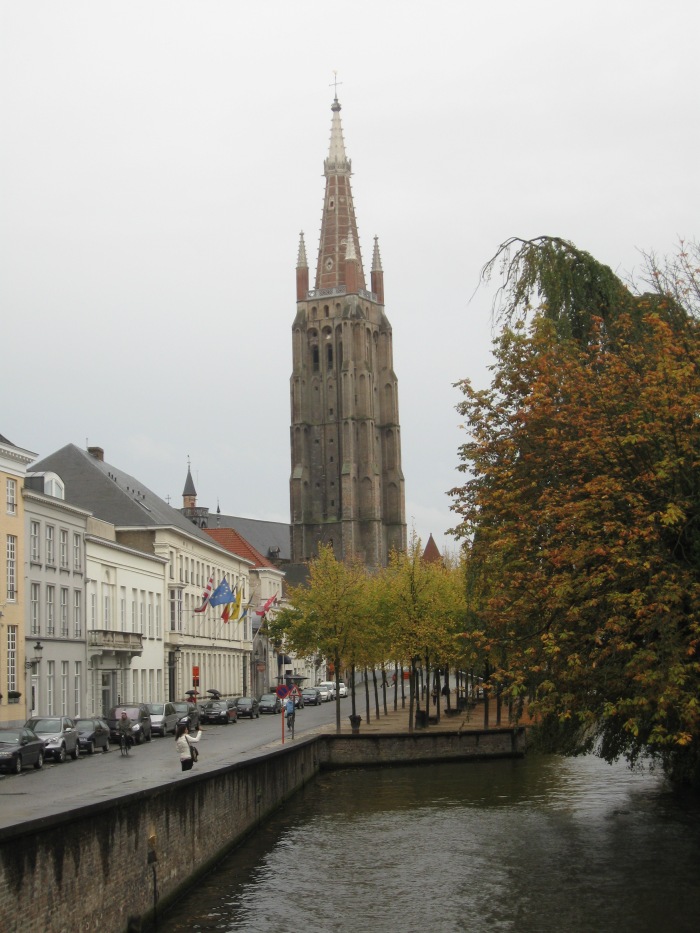 I also decided to enjoy some of the things Belgium is famous for creating: French Fries and Beer (I had a waffle the next morning, of course).

Belgium had, without doubt, the best beers I tasted the entire trip. The first stop was to get a Garre beer, which you can only get at the De Garre pub, located in de Garre alley. So yes, I had a Garre at De Garre on de Garre. I also met a super friendly couple from Portland with whom we had a nice little rant session about the American political scene and how crazy things are right now and how insane it is to think that we could have the same failed policies in office for the next four years. But, this blog is about my travels and not my political perspective, so please excuse that. They made me promise to vote in return for the beer, so I’ve requested my absentee ballot.

The next stop was a pub called ‘t Brugs Bertje, which, according to my tourist map, featured more than enough Belgian beers to satisfy me for the night. The best was either Rochefort 10 or Kapittel Abbot, and between the two I sure slept well that night. They also had a New Belgium sign inside, which was cool to see. None for sale though, which is OK because they had the real Belgian stuff that New Belgium can’t come close to making.

OK, so enough about beers (at least until I get to Munich). After a great sleep, I got up early so I could see some sights before leaving, which included climbing to the top of the tower and a Michelangelo sculpture.

After leaving Bruges at noon my next stop was to see my cousin Brian and his wife Jeza in Luxembourg City. I hadn’t seen Brian for 8 years or so, but I immediately recognized him at the train stop. It’s always exciting to see family, especially when it has been a long time. Soon after I met Jeza, his wife, who is a wonderful French woman with a super bubbly personality. It was great catching up with them, and they even bought me a huge French dinner and gave me a couch to sleep on. I can’t even describe how grateful I was, so all I can say, for the hundredth time, is thanks Brian and Jeza! You two know how to show a good time. Here is a picture of the two in front of the building where Jeza works.

They also gave me a great tour of the city, and of course I took tons of pictures.

The next day Brian had to get up early to take a train to school back in France, but Jeza was kind enough to let me pay for breakfast before she went to work. I had a few hours to kill that morning before departing, so I took a long walk in the valley that surrounds the city. Luxembourg really surprised me because I had no idea what it would be like, and it turned out to be one of the most beautiful cities in Europe.

I was so mesmerized by Luxembourg (and ended up taking a detour retracing my steps to Brian and Jeza’s apartment) that I ended up missing my train to Koblenz. So, with a little bit of schedule changing, I was able to connect the dots to Mannheim, where I would catch a train to Munich. As I was getting off in Mannheim, however, the intercom came on and said I would have a better chance of getting to Munich if I stayed on the train to Stuttgart. So I lost my seat but got back on and made it to Stuttgart, and it was there with a massive crowd I waited for a train to

The train from Stuttgart was probably at double its capacity with people lined up in the aisles. I was lucky enough to find a seat in the stairwell, only to have my large bag on top of me for most of the 3 hour ride. I arrived in Munich at about 7pm, and found a tourist info place that got me information on a nearby campground. One tram ride later and I had already met some Americans fresh from Oktoberfest headed to the same place. I took it easy that night after 7 hours of trains and transfers, and ended up meeting a super nice old guy from New Zealand who had a beard so thick it barely moved when he talked. The next day I was up early to make it into a tent. I soon found myself in a crowd of young people, which was eerily similar to World Youth Day in Cologne 4 years ago, but instead of following the crowd to the Pope, I was following a crowd to Beer Heaven.

The only tent I planned to visit that day was the famous Häufbrau tent. I’m not exactly sure why I chose that tent, but that seemed to be the place to be.

After an hour of waiting outside I finally arrived inside, where hops hung from the ceiling, the men wore suspenders, and the beer came in liter mugs.

Of the 6 million liters of beer they move through Munich at the end of September every year, they also move through 1.5 million of the best chicken I’ve ever had.

After the chicken, I decided to take a break by walking laps around the tent because I was by myself (besides the random people I met), and I knew I was going to meet up with some DU students studying in Switzerland that afternoon, so I had to save some of myself for them. And so, after walking for a bit to take a little of the buzz off, I stopped to send a text to my friend Curt, who was trying to get in. As I pulled out my phone, my friend Rachel from DU, who I hadn’t seen since she lived across the hall from me freshman year, magically appeared and brought me to a table full of students from her program, including several other DU students. Soon after Curt arrived, and good times were had by all.

After about 10 hours in the tent I decided to call it a night so I headed back to the campground.

The next day, I decided to go sightseeing in Munich. Sights included the Dom Tower, the Glockenspiel, and the Häufbrauhaus.

After watching the daily noon joust at the Glockenspiel, I stopped to get some postcards at a street vendor, where a man in his 40’s came and asked me “Sprechen zie English?” I looked at him, and looked at the postcards, and thought “Wow, was that a dead giveaway?” Anyhow, he and two friends were looking for the Häufbrauhaus, which was where I was on my way to, so we went together. The man was named Steve and worked for Thompson Elite in LA and his friends worked for Cisco Systems in Minnesota. They were super nice guys and even bought my beers at the Häufbrauhaus. (A hint for the young traveler- as I learned here and at de Garre in Bruges, always be super nice to anyone who is older than you because they will usually buy the beer, as well as be super nice to you back. Plus, you never know who you might meet and make connections with). If you guys find this post thanks again for the brews!

After the Häufbrauhaus I departed ways with my fellow Americans and went back to the festival grounds. It was impossible to get into a tent on a Saturday afternoon, so I walked around a bit and the returned to the train station for 28 hours of traveling by train back to Karlstad.

Congratulations if you made it this far! I can tell you it took much longer to write than to read. Now I’m back in Karlstad for what is my first really busy week of school, mostly because I am playing catch up and have all three classes this week, including the weekly, the bi-weekly, and the monthly one. I’ve also been catching up on my friends’ blogs, which I recommend doing as well. The temperature is also dropping quickly in Karlstad, which makes me excited for some snow. I’m hoping to go to the Snow Tunnel for some cross country ski action this weekend, and I hope to make it to Norway at least once this month. So, check back in a week or so to see how I’m doing, and keep on keepin’ on.