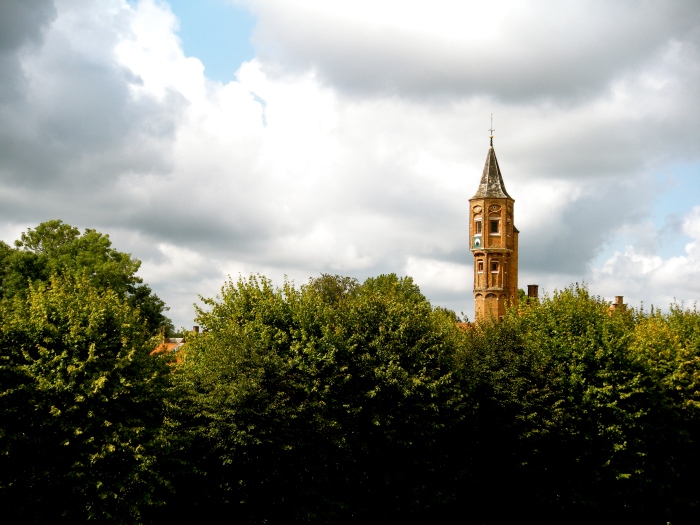 Just like in 2008, I went straight from Amsterdam to Bruges. This time, with my Dad in tow, I thought it would be in our best interest to stay two nights to make sure we get a solid feel for the city, and so we wouldn’t be shut out of some of the attractions because of their early closing times. We arrived midday on August 26th, and made our way to the Charlie Rocket’s hostel. We spent most of the first day exploring the medieval streets, and as Howard remained in complete awe of Bruges’ beauty, I took some time off from the camera to simply enjoy the UNESCO World Heritage Site with my own eyes (to see my original tourist-picture-spree, check out the beginning of this post from 2008). 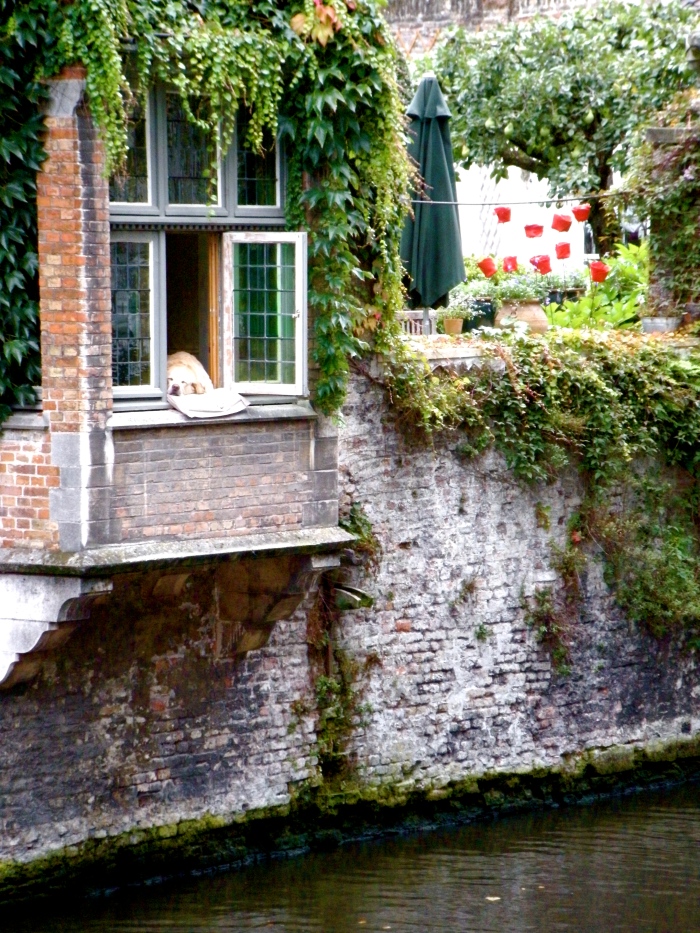 When I visited in early October of 2008, I walked the empty cobblestone streets fascinated by the magic of Bruges when it was empty. In late August, however, the city was overrun with busloads of tourists and fancy sportscars. Even the lazy dog pictured above had to retreat from his post when a canal tour with at least 20 camera wielding tourists pointed and shouted about how awesome the dog was. 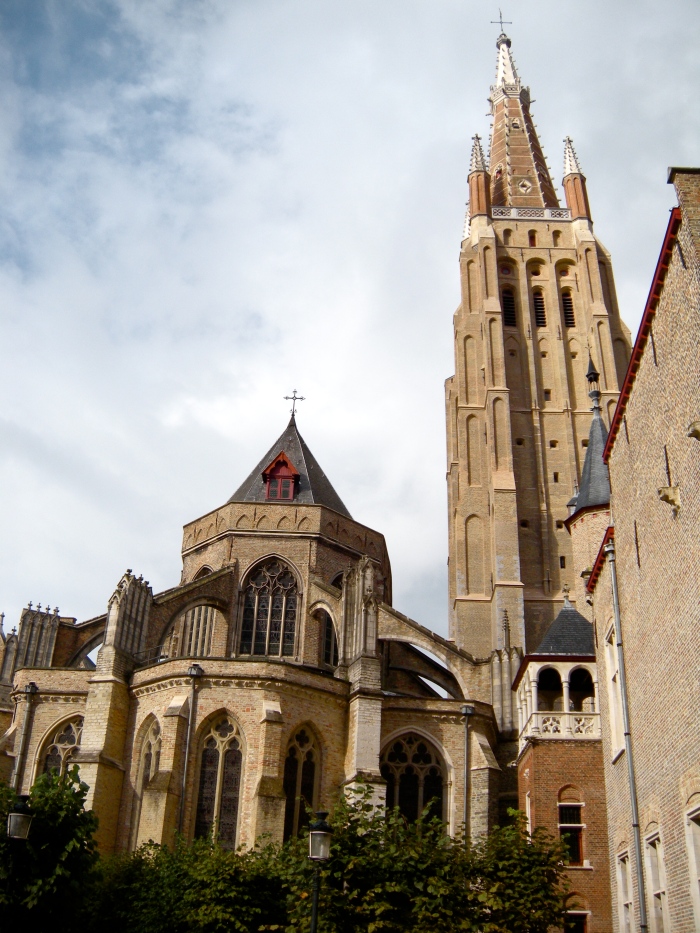 After having a Garre in de Garre on de Garre, we retreated to the famous ‘t Brugs Bertje, a pub I discovered in 2008 that holds a plentiful selection of Belgian beer, and commonly hosts the higher-ups of New Belgium Brewing, a Colorado company and the seventh-largest brewery in the nation. After charming our waitress and making the connection that we were from Colorado (sitting under the Fat Tire placard helped), we discovered our waitress was actually the owner of the bar, which would prove important the next evening. 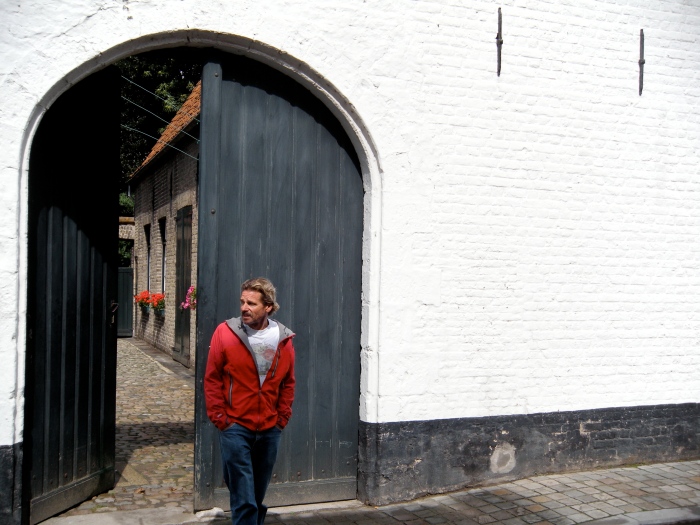 The next day, I took my father on the “Bruges Greatest Hits Tour,” which involved seeing the Michaelangelo statue, the Church of the Holy Blood where we actually got to see the vial of Christ’s Blood, and a climb to the top of the Belfry Tower. In between, we explored the northern part of town and the east side of town outside the city walls. I didn’t really get to see either of these locations during my brief visit in 2008, so it was fun to see more of Bruges (and take photos, of course).

During our excursion to the northern part of town, Howard and I played a rousing game of lawn bowling, complete with our own set of rules, at the oldest pub in Bruges. Before long, however, we found ourselves heading back into the center of town to what became known as “The Laboratory,” or ‘t Brugs Bertje, to get some “research” done as the sun was setting. We were slightly dismayed when we discovered that the owner, Daisy, wasn’t working, but we decided to carry on with our research without her supervision.

It wasn’t long before Daisy appeared with a couple who looked somewhat familiar. They sat with their backs to us at the bar, but were only at arm’s length from our table. Daisy came over with a big smile and informed us we were sitting “in the right spot” because the couple she had escorted in was none other than Jeff Lebesch and his wife Kim Jordan, i.e. The Founder of New Belgium Brewing and his wife, the current CEO. While I support their business model and appreciate what they have done for the State of Colorado, I can say with full honesty that I believe New Belgium makes the most overrated beer in Colorado. Since Howard’s opinion isn’t that much different than mine, we immediately started talking very loudly about how much better Odell Brewing is than New Belgium, how much Fat Tire sucks despite having become the unofficial beer of Colorado, and that 90 Shilling is the best beer brewed in Fort Collins, if not Colorado. When that didn’t catch their attention, we started talking about the Broncos’ upcoming season and how the Rockies were losing. Yet again, our raised voices garnered no attention from the esteemed guests, however, talking about the Broncos caught the attention of an Englishman who was a fan of the Miami Dolphins for some unknown reason. 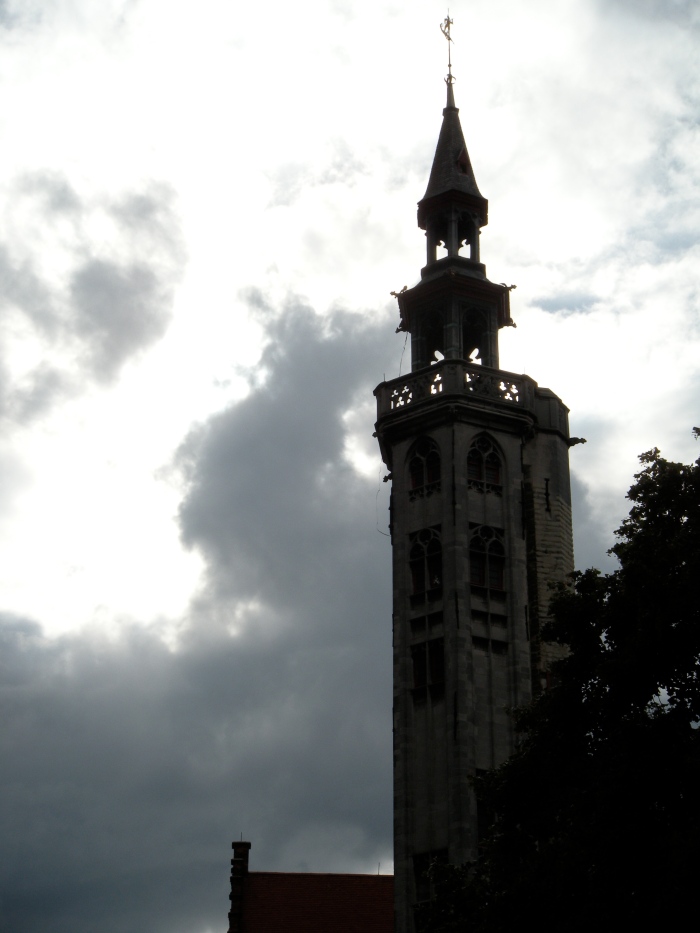 Well, the famous Colorado couple got up to leave and said goodbye to Daisy, who happened to be getting our next order at that exact moment. We shook their hands and said “way to represent Colorado” and “at least you know where to drink in Bruges!” Jeff looked fairly shnockered and just smiled and ignored us even as he looked us in the eye. With their departure, however, Daisy returned to our order. I asked for something “hoppy,” and she asked if I would want what Jeff was drinking. Noticing his beer was still half full, I asked why he didn’t finish it. I pondered if his taste buds had become too accustomed to the devil in American craft beers known as hop oil, but Daisy said “well, he tried 40 beers today, so, you know…” (that explained why he looked totally plastered!). It would turn out to be a delicious Belgian IPA that I cannot find the name of (nor was it on the menu), and was one of many that night that we thoroughly enjoyed, but ended up spending most of the money I had planned to spend in Brussels.

The night would stretch long as people at the bar continued to get weirder, but we pulled it together, paid our rather hefty tab, and made the short walk back to the hostel. The next morning, as we meandered to the train station, we found the bus depot, emitting a constant stream of the tourists we had dealt with for the past two days. While I absolutely love Bruges, I have to say that if you are planning a visit there, go during a shoulder season for optimal enjoyment.